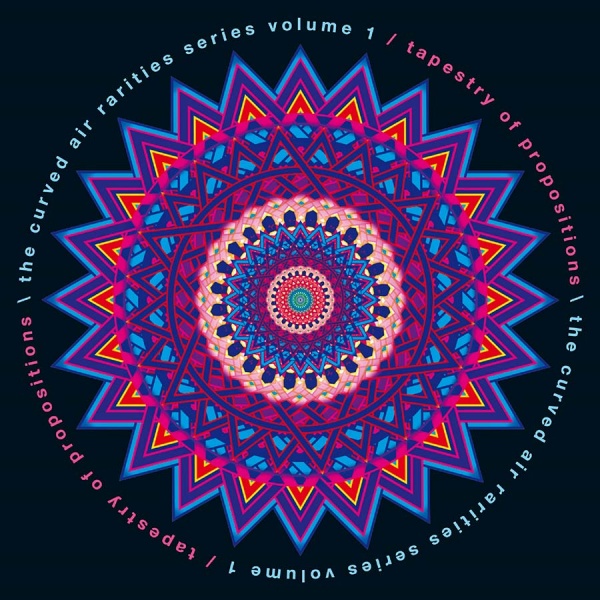 “Propositions” was a track on Curved Air’s debut album, at 3:09 a normal-length song, an energetic blast of early progressive rock that features a vocal section at the start, then an instrumental middle where guitar, violin, and keyboards all seem to be soloing at once, then a reprise of the vocal section to finish it off. As evidenced by Curved Air Live, as well as some TV appearances that have survived, the track was considerably extended in a concert setting, running six to eight minutes or so, with the middle section providing an opportunity for extended improvisation. “Propositions” has appeared on most of the live albums released by the band, remaining a staple of their sets to this day. Tapestry of Propositions is a celebration of this one song, presenting the beginning and ending sections separated by 15 different improvised middle sections taken from various shows on the band’s 2013 tour. These improvs have been edited together to present a seamless (or nearly seamless) extended version of the piece, and given that these improvs always start and end with the same unison line, a kind of structure emerges, somewhat like a jazz group stating the head of a tune before passing the solo spotlight to the next player. Most of the improvs start out with Kirby Gregory’s guitar dominating, though Paul Sax’s violin and Robert Norton’s keyboards come to the fore from time to time. Some of the transitions are a bit awkward in spite of the repeated theme: since they were recorded in different venues with different acoustic properties, the sound can be quite different, varying in quality and dynamic range. It is nice to note that the players actually are improvising — in the situation of a working band on tour, solos will often get honed to be more or less the same every time, whether deliberately or not. In this case, the players do tend to apply certain motifs at multiple shows, but not in the same exact way. But the big question is — does it get old after a while? 15 improvs ranging from 3:05 to to 5:08, is that too much, more than is likely to hold a listener’s interest? For me, the answer is yes. It is too much. For serious fans only.