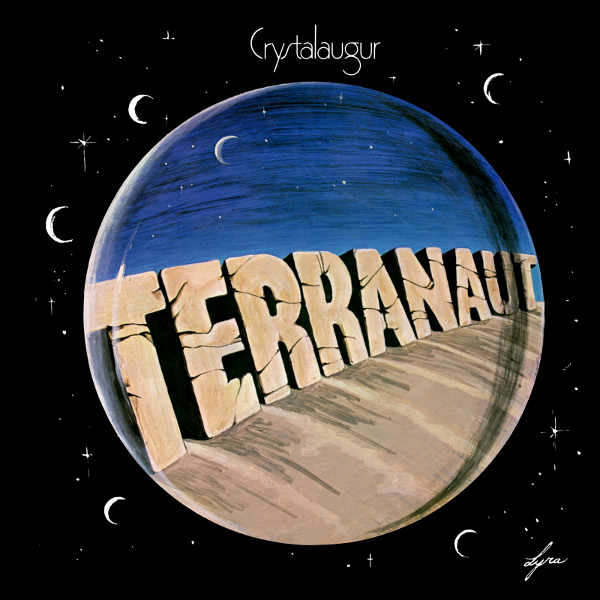 Crystalaugur’s Terranaut has been one of those rarities from the 70s that has collectors drooling whenever a copy surfaces. This private pressing of 200 copies has been bootlegged many times and the mystery of the band has spawned many myths and false rumors. This Out Sider reissue is the first legitimate release of Terranaut. And the detailed liner notes by Jeremy Cargill set the record straight about the band and the album. Crystalaugur was a high school project by four ex-pat teenagers living in Singapore in 1975. These 15-16 year olds (Kim Bengs on guitar, piano, extraneous noises, and vocals; Howard Kukla on rhythm guitar; Bryan Hall on drums; and Guy Rittger on bass guitar) recorded Terranaut on a 4-track machine over their two-week winter break in January 1975. Consequently, the sound quality is lo fi at best and lacking years of performance and engineering experience, the music is a bit raw. Living in Singapore in the 70s pretty much guaranteed their isolation from much of what was musically happening in States and Europe, so Terranaut is Crystalaugur’s interpretation of psychedelia and progressive music. The title track opens the disc with Kim’s piano and vocals that segues to the full band. Kim tries to play an interesting guitar riff, but given his age and lack of experience there are a few flubbed notes that more practice, experience, and time in the studio could have perfected. The second song, “I’ll Be Remembered,” is a funky psych tune featuring Bryan’s attempt at a drum solo. Next in line is “Cosmic Journey,” an instrumental that is not really cosmic. There is a repetitious rhythm guitar strumming and drums that overpowers Kim’s experimental sound effects on his guitar. Song four is “You’ve Got to Rap …” with its funky guitar and bass riffs. This song reminds me of Brainticket’s “Egyptian Kings.” But there are periodic crashing noises that seem quite out of place. “Uppachit Creek” is next and features Kim on slide guitar, but he has an odd way of playing and bending notes. Track 6, “Easy Time Pleasure,” is the first song that really grabbed my attention. This introspective song develops into excellent psychedelic rock with elements of Pink Floyd and Can. “Pams Song” is another instrumental with some lyrical guitar riffs obeying the standard rock I-IV-V-I progression. “Number 4” is a slightly aggressive song with fuzzed guitar. And the album closes with the short and sweet electric piano ballad “Goodbye.” Terranaut is definitely Kim’s project and is quite an impressive release for high school students with no experience. Sadly Terranaut was their one and only release. Though the original pressing is quite rare, the music is probably not worth the high prices commanded by collectors. Fortunately, Out Sider now makes Terranaut available as both vinyl in an old school tip-on sleeve and CD so anyone can grab a copy at a reasonable price.

Luminos - Seize the Day – Seize the Day is the debut from this quartet from northeastern England. Musically, they fall roughly into the same realm of symphonic- and neo-prog-lite as Guy Manning or Mostly Autumn (sans Celtic...  (2005) » Read more