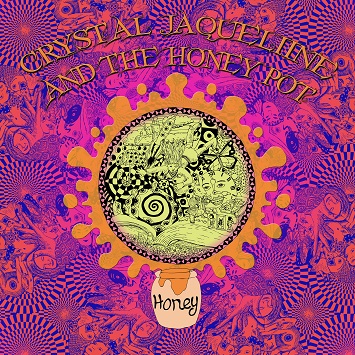 This new slab of FdM vinyl is Crystal Jacqueline’s second release on the label. What started out as a cover of the Jefferson Airplane’s “White Rabbit” rapidly grew to seven songs across a double 7-inch. On her previous FdM single Crystal was joined by bandmate Icarus Peel. On this new release the entire band, The Honey Pot, contributes to reinvent/reinterpret a number of pop-psychedelic treats from the past: Pink Floyd’s “Remember a Day,” Fleur de Lys’ “Tick Tock,” Mighty Baby’s “Egyptian Tomb,” Curved Air’s “Puppets,” and The Electric Prunes’ classic “I Had Too Much to Dream.” In addition, they also play Icarus Peel’s original tune “It’s Raining.” This is one strong set of cover tunes setting the pace with “Remember a Day.” This song never sounded so fresh and inviting and I think it takes the Pink Floyd original to a new level of trippiness. It is difficult to take iconic recordings like “White Rabbit” and “I Had Too Much to Dream” and make them your own — people will always be comparing them to the originals. And of course, I fall into that trap as well. “White Rabbit” doesn’t have the raw edge of the Airplane, but it is just as sinister. But I am a bit disappointed with “I Had Too Much to Dream.” The Electric Prunes hit you hard with this song, and this closing track is like Crystal Jacqueline and The Honey Pot did have too much to dream and are having difficulty waking up. The performance is a bit slow for me and it takes a while to build some momentum. But that is only a minor complaint. The other songs are great and demonstrate a wide range in playing, vocalizing, harmonizing, and styles. This new double EP will be released in March 2014, so there is still an opportunity to grab a copy from Heyday Mailorder before this limited edition sells out and you are faced with paying exorbitant amounts on eBay.