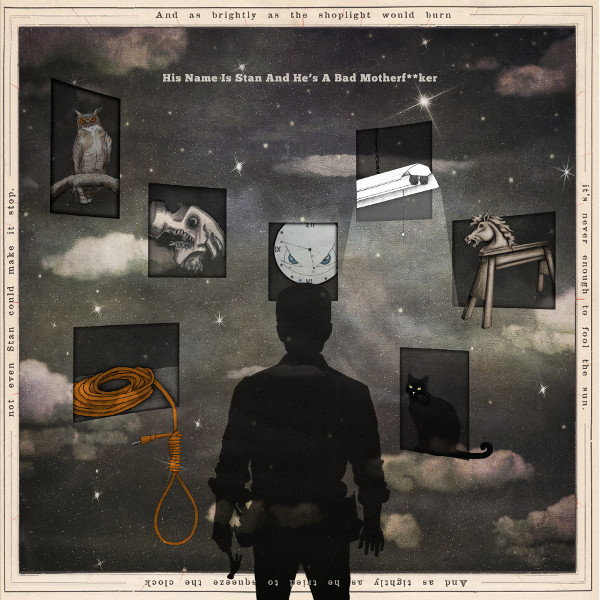 His Name Is Stan and He's a Bad Motherf**ker is the debut album of a new progressive rock band from Austin, Crocodile. Band leader, composer, and guitarist Kevin Sims has created a progressive rock opera the likes of which we have not seen in decades. Drawing on influences from Gentle Giant, Genesis, Jethro Tull, and PFM, His Name Is Stan and He's a Bad Motherf**ker tells the story of Kevin's first job as a teenager doing high quality construction and remodeling work for Stan. Stan was a workaholic and perfectionist, something that Kevin could not relate to at that young age. He dreaded the start of each day and longed for the end. This feeling of dread is reflected in the opening track “(pre)Dawn of Stan.” Here we first encounter Crocodile’s powerful symphonic rock, propelled by Ted Thomas’ (Thirteen of Everything and Virtual Noise DJ on KOOP) heavy bass, Philip Spann’s keyboards (Mellotron and synths), and Greg Seale’s drumming. They do not sound at all like their influences above, but there is something elusive that keeps making me think of Gormenghast. Kevin starts his work day on track two, “I Was a Worker,” with its melodic and mechanical music-box-like intro into an upbeat and complex song, with Stan's refrain “Sure do need you to work… forever.” Track three is the instrumental, “Sawhorse,” with its fantastic interplay of progressive blues rock, European sound, synths, and a dash of Krautrock. “Stan” follows and emphasizes Stan’s work ethic and attention to detail told as a hard rock / jazz fusion song with a bit of dissonance and a cool guitar solo. When we reach mid-day Kevin takes a short cheerful symphonic instrumental break “Interlude (Lunchtime).” Then it is back to work with the complex “Stir the Stain (F**k the Door)” that relates an incident when one day Kevin dropped an open gallon of dark brown stain in the living room of a beautiful white carpeted house. And this was the only time that he had ever heard Stan curse. To close the album, we fast forward 25 years to the present day where Kevin comes to the realization that “I Am Stan.” This closing track combines western swing with intricate progressive rock, something completely new, that moves through numerous mood and tempo changes. His Name Is Stan and He's a Bad Motherf**ker is an impressive debut album, especially so since it is released on vinyl, and certainly one of the best from the Austin progressive rock scene.