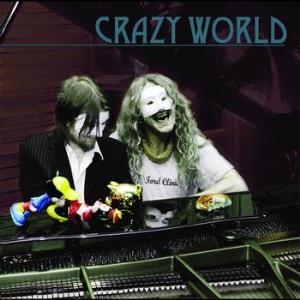 What happens when you take the best of Finland’s rock stars of today and yesteryear, put them all together in one supergroup, and have them write and perform a bunch of songs in the style of the good old days about the rock and roll lifestyle – that is, touring, groupies, sex, alcohol, drugs, and drug rehab? You got it – Crazy World, and this is one crazy outfit, having a good time making great rock and roll like nobody seems to make anymore. Front and center is none other than wildman Mika Järvinen from Five Fifteen... some may remember him at Baja Prog a few years back climbing the walls bare-chested with his fly-eye goggles and covered with silver paint; yep, he’s still the same wildman. At the drum kit is Ansii Nykanen, longtime drummer with Pekka Pohjola’s group, and on keyboards Esa Kotalainen, veteran of Wigwam, Jukka Tolonen’s group, and numerous others going back to the day, as well as a few solo albums too. Rounding out the lineup are Warmen/Stratovarius bassist Lauri Porra, and guitarist Timo Kämäräinen from Husky Rescue. All put together these guys kick ass like no other band I’ve heard in a long time – this album doesn’t sound a day newer than 1973. The influences are evident: Pink Floyd, Led Zep (even covering “Good Times Bad Times”), The Who, pre-dance Bowie, and others of the period, yet the material is surprisingly original and stands up well to repeated listens. The vintage years live again!