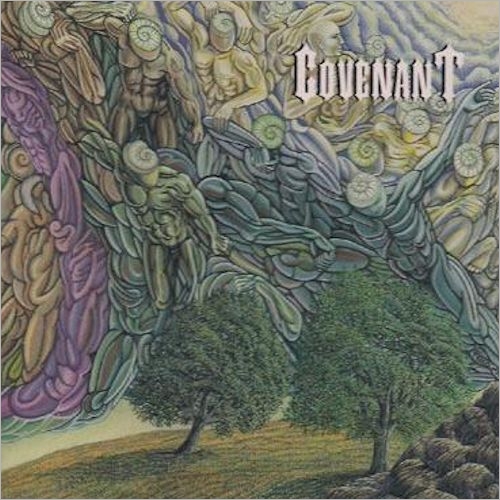 It seems that the one-man band is making a comeback in the American mid-west. Whether this is a positive happening or not, I will leave to the individual listener. Covenant consists solely of one Dave Gryder, formerly a drummer from a trash-metal band. Syn-phonic put this album out under the name of Covenant for marketing reasons, and who can blame them? I can count the progressive rock solo albums that I enjoy without going into double digits. I've always considered prog as the ultimate form of synergy. Musicians of better-than-average skill pull ideas together in a form that none of them could have done on their own. The creative process of three or more people can be fascinating to watch, especially in music, as dozens of related, unrelated and/or random ideas get turned into a cohesive piece. Without bandmembers to provide feedback and vetoes, it seems harder to step back from your own material and see it through someone else's eyes. This is what I hypothesize Gryder had to go through, as he wrote this album. Nature's Divine Reflection is a keyboard/drum wet dream, with Gryder's virtuosity on both instruments near the mastery level. However, the lack of bass (mixed so low it might as well not have been there at all) and guitar (two way-too-short interludes by fellow free-lancer Bill Pohl) limits this album to a very one-dimensional appeal. But somehow, it still works. The keyboard array consists to something straight out of the seventies. Mostly analog (or digital imitating analog) keys add a dark, gothic feel. Mellotrons and church organs, blistering runs and atmospheric themes, add to the mix. And the drumming - wow. I always notice the drum lines because it often divides the good prog from the not-so-good. Gryder's talents are prodigious as his busy, fast style dominates the rhythm. The metal influences are evident, perhaps reminding me of modern death-metal drumming, like that found on Cynic's or Atheist's newest albums. So here we have the darkness of Il Balleto di Bronzo, and American ELP style without the "L," perhaps an updated version of the incredibly overrated band Quill, but without the pretentiousness and lyrics that make Quill unlistenable. Gryder's definitely a major talent, but he needs to work with a real band to truly exploit his skills. Albums like Nature's Divine Reflection are good listens but they tell of too much unused potential. Missing from this offering is the synergy of a group of people working together (as well as the instruments that members of that group would be playing). I'll give Covenant a B+. Worth owning, but could have been so much better!