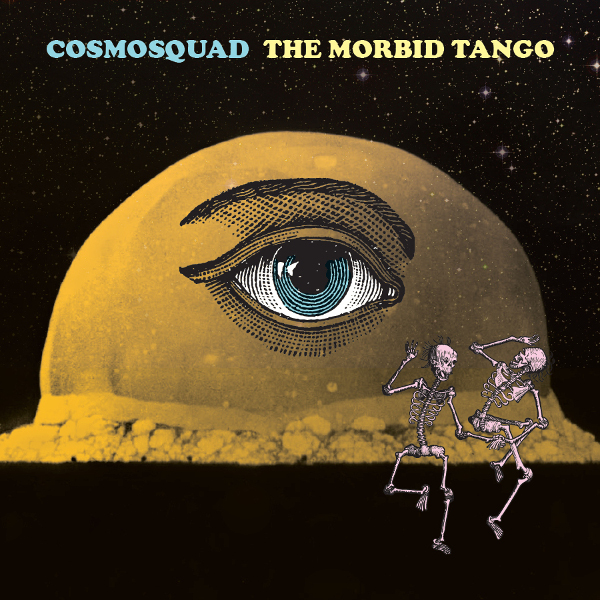 Jeff Kollman is a guitarist from Toledo, Ohio best known for his powerful melodic electric guitar playing, fusing elements of jazz harmony into his hybrid melodic hard rock / funk style. He is also the owner of Marmaduke Records, with a long list of solo, band, compilation, and guest appearances, as well as touring since 1998, acting, composing TV soundtracks, commercials, and film trailers. One of his projects, Cosmosquad, debuted in 1997. And with all of his other projects going on, Morbid Tango is only their fourth studio album, their previous album, Acid Test, being released in 2007. Today Cosmosquad is Jeff Kollman (guitars), Shane Gaalaas (drums), and Kevin Chown (bass). Morbid Tango is one amazing album that ranges from the beautifully melodic to gut wrenching guitar pyrotechnics. The eleven instrumentals are all different and clearly show that compositional thought was primary in the creative process. Many times it appears that bands just try too hard to be “progressive” with most of their music being merely variations on a theme. In Cosmosquad’s case they integrate many different styles. The title track opens the disc with a Spanish guitar intro and of course a tango rhythm. They add layer upon layer of complexity including violin, castanets, drums, electric guitar, etc. that morphs into prog-jazz fusion with some guitar shredding and then returns to a tango in the final moments. “The Ballad of Rick James,” Mr. Superfreak, has a funky dance beat and gritty guitar, making it one of several tracks where you can visualize the skeletons on the cover art dancing. After the prog metal of “Cyclops,” “Anatomy of a Beatdown,” and “Recollection Epilogue” there is the beautiful and exquisite “Always Remember the Love.” Over the course of the album, I reminded at times of Pat Metheny and Roy Buchanan. Kollman is a virtuoso guitarist, Gaalaas is an amazing drummer, and Chown is a powerful bassist. Morbid Tango will surely appeal to even the most jaded of listeners.

Peter Frohmader - 2001 – Pounding beats, throbbing bass, swirling electronics. Is this latest acid house, acid techno, electro-techno (whatever label you choose) sensation from Germany? No, surprisingly it is a foray into...  (2001) » Read more