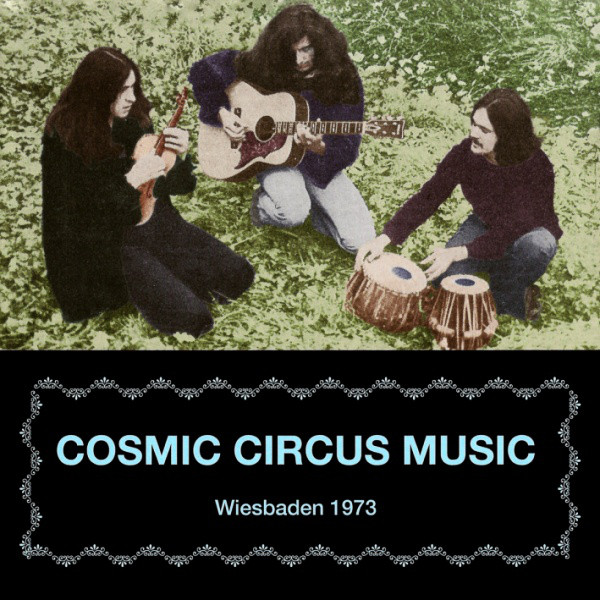 An interesting release to say the least, Cosmic Circus Music was the trio of guitarist Bernd Diesner, drummer / synthesist Ulrich Maßhöfer, and bassist Karl-Heinz Keffer. They existed as a band from late 1972 until around 1974 or ’75, only releasing a cassette tape during their short lifetime, but gigging far more regularly, often in collaboration with other musicians, being good friends with members of Embryo, Missus Beastly and Xhol (Caravan), in fact Tim Belbe of the latter band is featured on the second part of this recording playing flute. The band lived communally with their equipment manager and sound man, their band name an attempt to (rightfully) align themselves with the ad-hoc colectives being relaesed on Rolf-Ulrich Kaiser’s Kosmiche Musik / Cosmic Couriers label, along with members of Popol Vuh, Mythos, Tangerine Dream, and Ash Ra Tempel, the latter’s first album being a good reference point as to where Cosmic Circus Music was at in 1973, and although the style is somewhat different, the spirit is similar enough to warrant mention. The album is actually a single 82 minute track “Sternenmaskerade” divided into two seamless parts - the cassette tape it was originally recorded on needed to be flipped over in mid-set, but the audio engineer fused the two parts together so well that one probably wouldn’t notice unless you are watching for when the index changes. In fact the track probably went on much longer, but 82 minutes is the absolute capacity of the CD medium. The piece starts out with some bird-sounds but then quickly moves into free-form rock jam territory, slowly evolving as it goes, a solo popping out here or there, textures changing as the minutes pass, it is indeed very cosmic and fits well next to much of the early 70’s jam driven free-form German rock. There is synth but one won’t hear any of the sequenced trappings that exist on many albums of the period, this is a far more primitive hands-on approach. A great set by an excellent band that should have received far more recognition in their time. As always, Garden of Delights provides very comprehensive booklet notes, including interviews with two members of the trio, plus the recording engineer Muck Krieger.