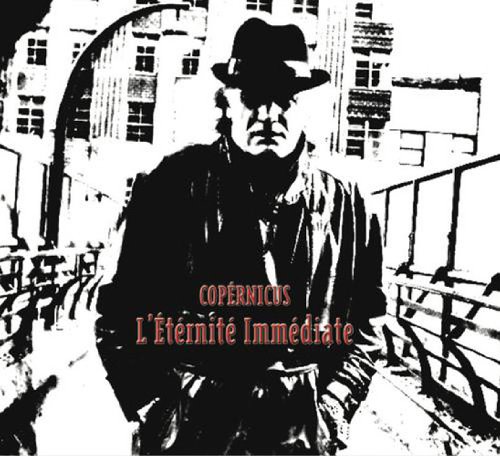 Copernicus hit the scene in the mid-80s, a rambling beat poet with a message that nothing exists, not the earth or anything on it; his reality is viewed through subatomic terms. If nothing can stay the same from one moment to the next, then how can anything exist? His message was backed up by a large group of highly skilled improvising musicians, which made Copernicus’ ranting more tolerable and less like the musings of a madman one might find wandering the streets of New York. One release after the next, his message became more angry and seemingly filled with rage aimed at society, his perspective turning further inward and isolated. Around the time Option Magazine (which had been giving each of his releases extensive coverage) folded, Copernicus seemed to disappear also; for nearly a decade there were no new releases. In 2001 he re-emerged from his hiatus with a much smaller four-piece group of musicians from Ecuador, with essentially the same message, perhaps with the anger dialed down a bit. Two albums were recorded: La Eternidad Inmediata (in Spanish) and its English counterpart Immediate Eternity; it was the beginning of Copernicus bringing his message to the non-English speaking world. A few years later, following a series of 25 concerts in Ecuador, those albums were re-recorded, and the same musical bed was used to produce two additional releases, Die Sofortige Ewigkeit (in German), and the subject of this review, L’Étérnité Immédiate (in French). So here you have it, essentially Copernicus’ sixth album, re-recorded and delivered in French, and to my knowledge the last time he would release anything in languages other than English.