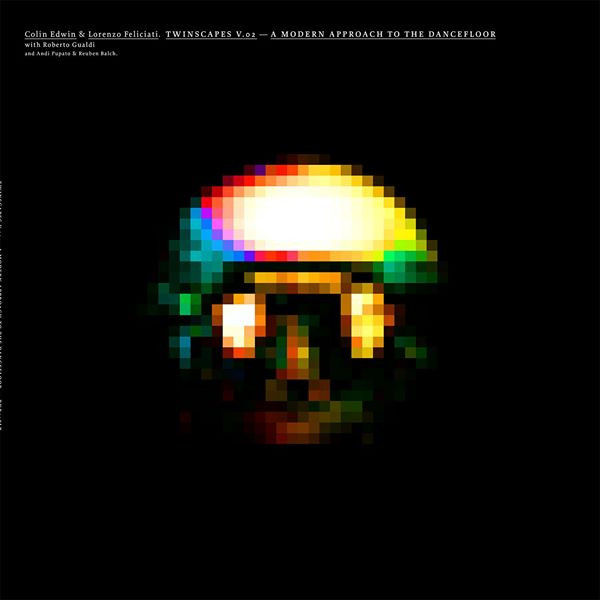 This pairing of two prominent bassists is a very balanced affair, with only occasional times when there are definitely two basses in the mix. More often, there’s one bass and a wide array of keyboards, percussion, and other instruments. Edwin contributes fretless bass, programming, and E-bow (though what he uses the E-bow on isn’t specified); Feliciati plays fretted and fretless basses, guitars, and keyboards; both are credited with sound design. Guests contribute drums, percussion, sax, and flute, for a resulting sound that is lush and full, with lots of space and ambience. The album’s subtitle, A Modern Approach to the Dancefloor, may be more aspirational than descriptive. While most of the tracks have nice grooves to them, they don’t sound like any dance music I’ve heard — if dance clubs really played stuff like this, I’d be more likely to hang out there! The album is full of great bass playing (of course), but also many other great touches, like the sampled choir in “Severing Suns” backed by a funky rhythm section. It’s the kind of thing that maybe wouldn’t be expected to work, but just does. It sounds like it should be on the soundtrack to a widescreen movie for aerial shots as the protagonists head into danger. There are also times like “Bedroom Corner” where a fretted bass provides a funky low end while a fretless bass takes the melody, definitely a case where two basses are exactly the right amount. So whether you’re a DJ that wants to mix it up for adventurous listeners, a low-end fan who likes hearing catchy grooves done imaginatively, or just someone who wants to hear fascinating sounds and bob your head, Twinscapes Vol. 2 has something to offer.