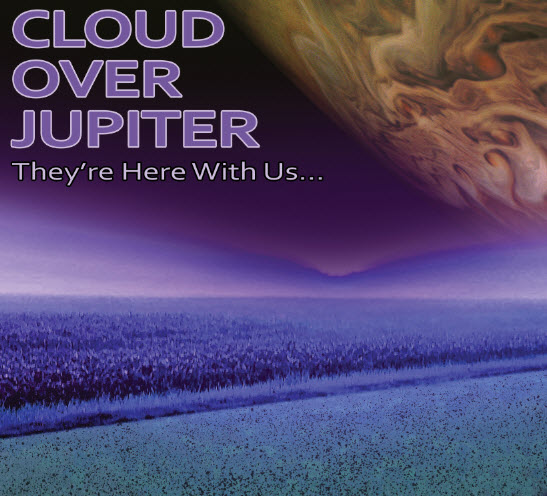 By all accounts, this is the third release by Cloud over Jupiter, the Wisconsin based project of multi-instrumentalist Jerry King, featuring singer and lyricist Michele King and multi-instrumentalist / co-writer / arranger Chad Wardwell, along with numerous other players, track depending. That would include most of the players who featured on 2019’s Short Stories for Tall Aliens (keyboardist Pete Prown, drummer Paul Sears, multi-instrumentalist Dave Newhouse, flutist Ian Beabout, drummer Bill Jungwirth, guitarist Bret Harold Hart and others), though lyricist / vocalist John Shirley isn’t on board for the current album. One may recognize many of those names from King’s involvement in other projects Moon Men, Oval Planet, Manna/Mirage, etc. Released in the final months of 2020, They’re Here with Us is probably COJ’s strongest effort to date, featuring a balance of rock-oriented vocal tracks and (generally) shorter more-experimental instrumental compositions separating them. The powerful guitar solo that kicks off opener “Psalm” soars over a churning firestorm of bass and drums until Michele King’s vocals, along with intermittent solos for flute and various guest guitarists, reach through its seven minute conclusion, with multiple false endings. By which time the listener will probably want to double back and play it again. “It’s for You” is another vocal piece, a bit more gentle, this time featuring Michele on piano as well as lead vocal, with Newhouse and Mark Larson offering effected piano and keyboard solos throughout. “Pinnacle Valley” and “Helium Histrionics” are both shorter instrumental pieces featuring only Jerry King and Wardwell, the latter featuring some beautiful soaring guitar sweeps over a textural synth backdrop. “Alien Pharaohs / They’re Here with Us” is more like a medley of several different ideas starting with a synth solo by Walter Whitney, giving way to an acoustic guitar and flute-based section with Michele’s vocals leading, up until the harder rocking “They’re Here with Us” section that might hint of a mashup between 80s King Crimson and Thinking Plague. One has to commend the way that the vocal cuts are separated by beautiful and varied instrumental interludes, which keeps the album refreshing and interesting to its very end, which would be the Crimson-like instrumental “Black 46 – The Return,” a reference to several cuts on the first two COJ albums. In all, there’s more than plenty here to keep the intrepid listener engaged.