Close to the Rain Festival in Bergen Announces Lineup

Now in its second year, the Close to the Rain Festival of progressive music is scheduled to take place in Bergen, Norway, on June 7 - 9. They've got an amazing slate of bands lined up, including such powerhouses as Anekdoten, Major Parkinson, Arabs in Aspic, Tusmørke, and many more. 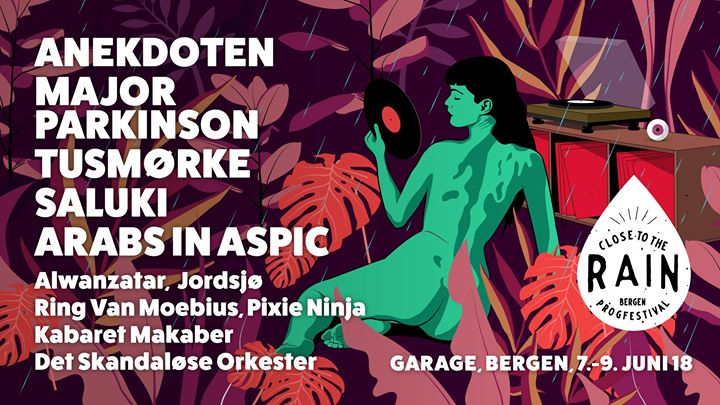 Close To The Rain- Bergen Prog Festival is an annual festival celebrating its second year. It takes place once again at Garage, Bergen over three days in June. It's a celebration of the great nordic progscene with 10 bands from Norway and the mighty Swedes Anekdoten !
It starts on Thursday 7/6 with: Det Skandaløse Orkester, Kabaret Makaber & Major Parkinson ( all from Bergen) & on Friday 8/6 it continues with Alwanzatar, Jordsjø, Saluki & Tusmørke ( all from Oslo) before ending on Saturday 9/6 with Anekdoten ( Sweden), Arabs In Aspic ( Trondheim), Ring Van Moebius ( Kopervik, Haugelandet, Norway) and Pixie Ninja ( from Rognan, Nordland, Norway) in that order. We look forward to see you all there !

See below for links to the Facebook page and ticket purchase page.