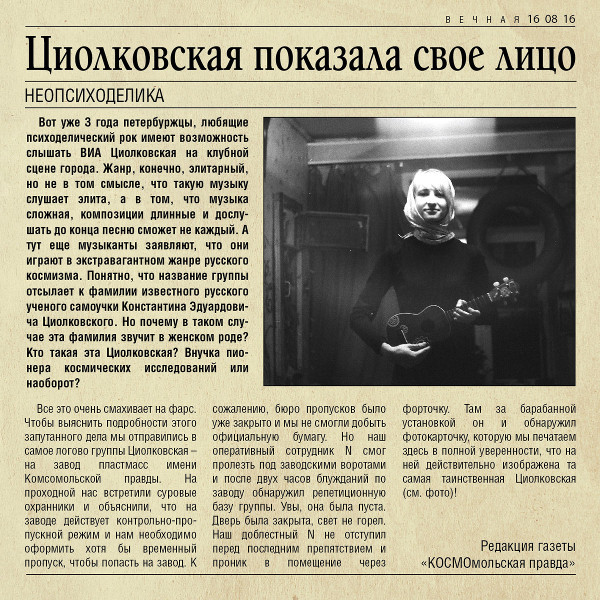 Showed Her Face is Russian band Ciolkowski’s second album, released in 2016. Just like their third album Avtomat Proshlogo released last year, Showed Her Face is a set of experimental / progressive / psych / space rock instrumentals. However on Showed Her Face, Ciolkowski presents four long tracks, one of which is a remix of track 2 and the other is a bonus track. Most of the tracks have Russian titles, so I will not attempt to name them here. Each track is unique, but with similar elements that tie them all together, dreamy reverbs and delays, warped dissonance, and experimental cosmic jams. There is a sense of the free-form psychedelic experimentation of the late 60s in Germany, think of Amon Düül II. Though not quite Krautrock, Ciolkowski does explore the cosmos with their music. And the fourth track, which happens to have an English title, “Kirya Pistolzzz in the Future,” is a remix by Primary Substance that is totally unrecognizable from Track 2. The additional reverb, delays, throbbing bass, and a bit of dub make for an excellent closure to the album. Showed Her Face was a surprising and refreshing find. Check it out on Bandcamp.