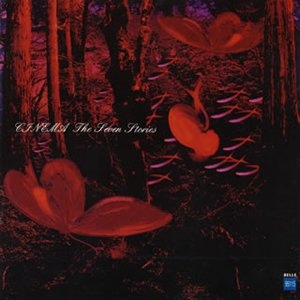 Cinema are a new project that Belle Antique are promoting. The band consists of former members of Fromage, and includes two keyboardists, an operatic female vocalist, and string players performing on violin and bazouki. On their debut, The Seven Stories, Cinema have tapped into a sound that is full of gothic ambience, together with some Mediterranean flourishes. The lead guitar is reminiscent of Asturias. Towards the beginning of The Seven Stories, the music seemed more impressive than Fromage. Certainly it's more original. As the album played on though, their minor-key-laden style began to wear me out a bit. Like some of Renaissance's ballads, they opt for a simple, classical-based sound that is abundant in orchestrational colors, but serves mainly to support the voice. Thankfully, Hiromi Fujimoto can sing with a full-bodied classical-sounding set of vocal cords. She absolutely never sounds screechy or whiny. In the instrumental department, synth programming and violin fill in for the absent orchestra, emulating the sound of the classic Italian groups I Pooh and perhaps La Bottega dell'Arte. It seems so, anyway, on songs like "One" and "Kaya." And magically, they manage to avoid any modern techno trappings despite this. Smothered in a cavern of echo, this set of melancholy-drenched songs captures a similar spirit to those groups. A simple, but elegant production, The Seven Stories should well please fans of this genre.