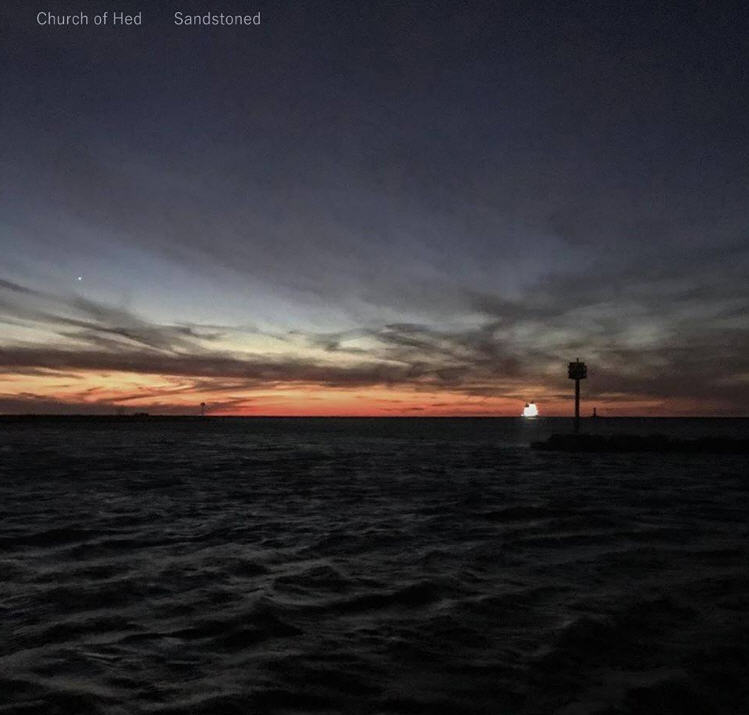 You never know what kind of surprise you’re going to get with a new Church of Hed release, but it’s always going to be something different than the previous one – that’s the way the architect of the project Paul Williams works; never content to stay in one place for too long, he’s always looking for new ways to utilize his multi-instrumental talents to achieve new electronic hybrids that are at once cutting edge and satisfying. Being a drummer and an imaginitive keyboard player and composer, he really has all the bases covered, but this time he has brought in his old Quarkspace bandmate Stan Lyon to play guitar and bass on about half the cuts, adding a new dimension to the sonic fabric. While the previous album Brandenburg Heights was in many ways influenced by the Berlin school electronics of Klaus Schulze, early Tangerine Dream and others, featuring epic length tracks that stretch out in many dimensions, Sandstoned features a more angular and experimental attack, consisting of ten succinct tracks that are typically in the three to four minute range (although the sweeping epic “3 AM at Hole in the Wall” is a notable exception, clocking in at nearly 11 minutes). “Synth Cadence” which appears early on in the program makes brilliant use of electronic percussion and dark gritty pulses until it opens up widescreen with some crazy twisting synth moves. It’s only a couple minutes long but it really has an amazing groove in tow. Both “1 AM at the Dean Road Bridge,” “2 AM at Crownhill Cemetery” and the aforementioned “3 AM…” are inspired by the night time ambience of places around Lake Erie, and truly convey the feeling of night with a dark, Cluster meets Michael Hoenig like feeling. “Dark Matter Sandstone” offers a powerful groove with sweeping synths and a simple underlying pulsating bass figure, all a bit reminiscent of Michael Garrison. Barely over a minute in length “The Prodigal Swanson” makes magnificent multilayered candy using synths alone. There’s a lot of variety across these pieces that makes for a fun listen that never gets old.