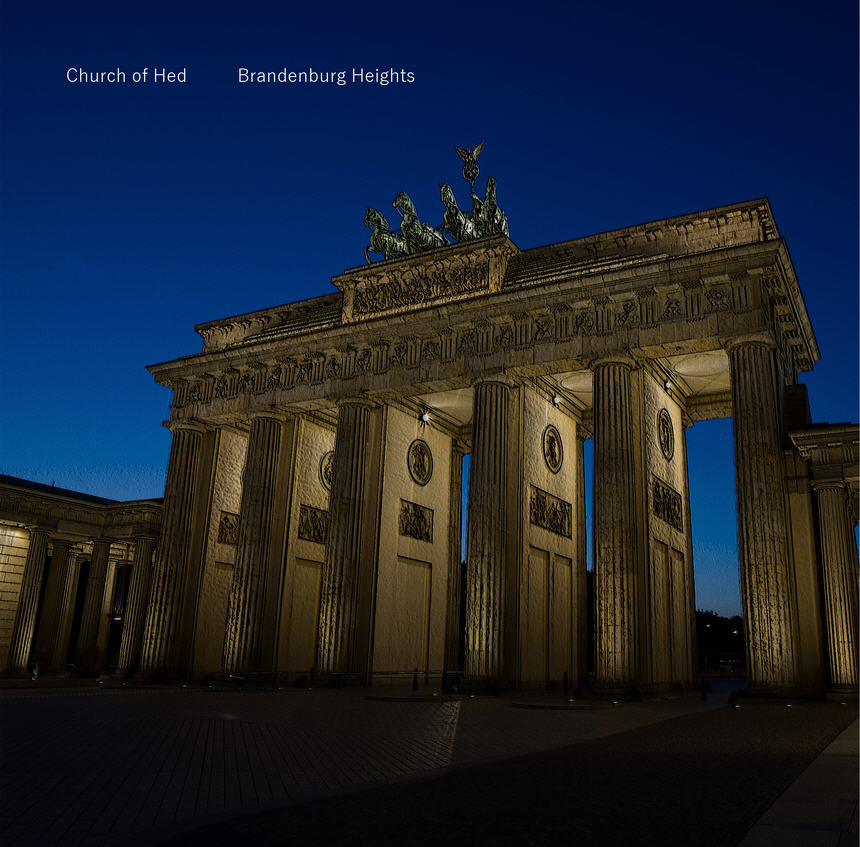 Church of Hed’s latest involves two side-length tracks of keyboard based electronic rock inspired by the Berlin school of music in its prime over 40 years ago. That’s not to say that this sounds like early Klaus Schulze, Tangerine Dream, and the like, but the two sides of Brandenburg Heights definitely find their inspiration and reason for being there. Church of Hed is one Paul Williams, formerly the drummer and keyboardist of space rockers Quarkspace (a band which seems to be either disbanded or on an uber long hiatus), who since 2002 has been going it alone as this keyboard based project. Here, Williams plays no less than a dozen analog and virtual analog synthesizers, sequencers, samplers, hardware effects and electronic percussion, all of which get used off and on throughout this two-part 40+ minute instrumental epic. There are some occasional heavily processed sounds that appear to have been triggered by vocals, but for all intents and purposes this is dense, heavily sequenced keyboard music beginning to end with some percussive sounds mixed in. Dense layers of various keyboard sounds mix with mysterious swirling sounds, gurgling, bubbling synths, pulsating keyboard bass, all marching forward to a tonic cadence in Williams’ lengthy compositions. There is repetition, as with any sequenced phrasing, and seemingly perpetual bass grooves abound, but ideas shift around and melt into one another as the works move forward in time aggressively, never looking back. As one listens to it, it’s impossible to take it all in at once, there’s too much going on at many different levels, so it’s probably best to focus on one part, and choose another part on the next spin, and so on, until the magnitude of taking it all in doesn’t overwhelm the senses. Needless to say, this one is a grower, new things are revealed with each successive spin.