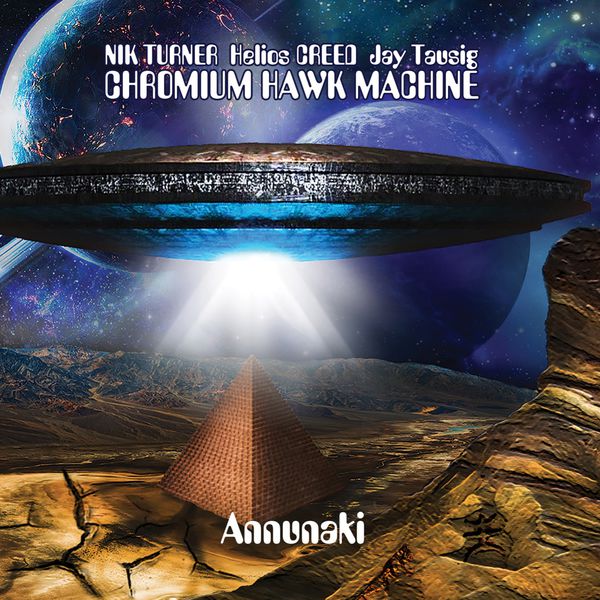 Here is an interesting blend of musicians, music, and influences. Chromium Hawk Machine is the joint effort of Hawkwind founder Nik Turner, Chrome’s guitarist Helios Creed, and Solid Space's Jay Tausig (drums and synths). Annunaki is more than Hawkwind meets Chrome. This is art influencing art influencing art, namely Hawkwind’s influence on Acid Mother’s Temple then influencing Chromium Hawk Machine. Annunaki was not at all what I was expecting. If you did not know what was playing, you could easily think you were listening to an undiscovered Acid Mothers Temple and the Cosmic Inferno release. Annunaki is music for the intrepid listener. The set opens with the 15 minute “Cosmic Explosion,” a sonic mass of sax, synths, guitar, bass, drums, and some processed voices without form for almost two minutes, then some rhythmic chanting and a motorik beat emerges from this sonic sludge, which is replaced by sax noodling after four minutes. The track title is an apt description of what you experience. There are a multitude of things happening in this syncopated pandemonium of sound, that finally coalesces just before the end of the track. Much of the nearly two hours of music spanning the two discs sounds like amorphous jamming improvs that you are waiting to resolve, especially the 32 minute “Crying Moon, Dying Sun.” This track is three times too long and is enough to make you want to move on to some other music, which would be a shame as the final two tracks “They’re Buying Time” and “My Fuzzy Fantasy” are the best tracks on this album. Both feature Mellotron and are what I was expecting from a Hawkwind / Chrome collaboration. Plus the 20 minute “My Fuzzy Fantasy” goes by in the blink of an eye. So hanging in there across the two discs does have its rewards, but the album should have been edited down to one disc.