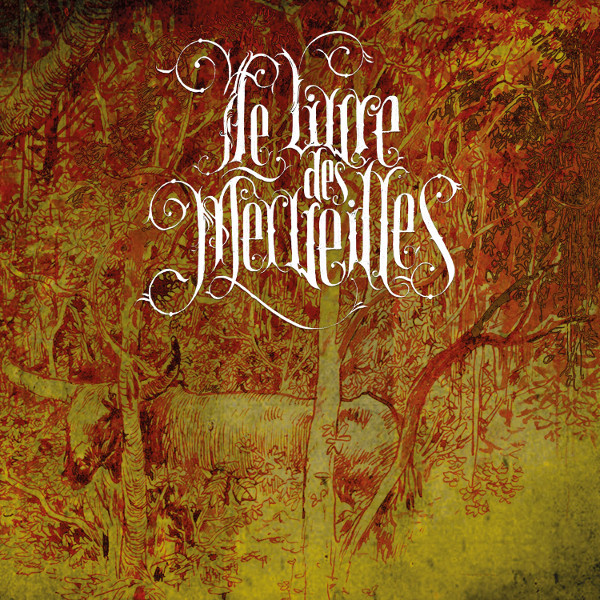 Chromb! is yet another Lyon band on Dur et Doux, and they share some qualities with labelmates such as PoiL, Ni, and Le Grand Sbam, though they have a sound of their own. The four-piece consists of Léo Dumont (drums, percussion, objects), Camille Durieux (keyboards, synths, vocals), Lucas Hercberg (bass, synth, vocals), and Antoine Mermet (alto sax, effects, synths, vocals), with Dumont, in true Lyon fashion, also being in the band Kouma. The shortest track on Le Livre des Merveilles (The Book of Wonders) is the title track, which opens the album in fine fashion, giving a taste of the merveilles to come. A stuttering rhythm from the bass is punctuated by brief blasts of fuzz while multi-part vocals introduce some of the themes that will recur throughout the album. Other sections feature a driving drum beat with long chords from the synths and weird screeches and scratches from the sax, with these elements being tossed out and abruptly changing. The rest of the album forms what could be regarded as a single continuous piece developing from there, divided into three more tracks of varying length, but returning to some of the elements from the opening at times while also adding other sounds. Their skill at managing the ebb and flow of their music is impressive, introducing something new then reprising a familiar theme in a new way, ramping up the energy then dropping down to a calmer section. The longest track features a gradual crescendo from nearly inaudible keyboard notes through overlapping sections where layers are added to the sound, some melodic, some textural or noise-based, working to an epic climax of fuzz bass and insane saxophone. They make the interesting choice of finishing off with a somewhat subdued energy level, with stately chords and throbbing toms. Le Livre des Merveilles is Chromb’s fourth album, though I haven’t heard any of their previous releases, and it shows a mature band making fascinating artistic choices to create a very distinctive sound.