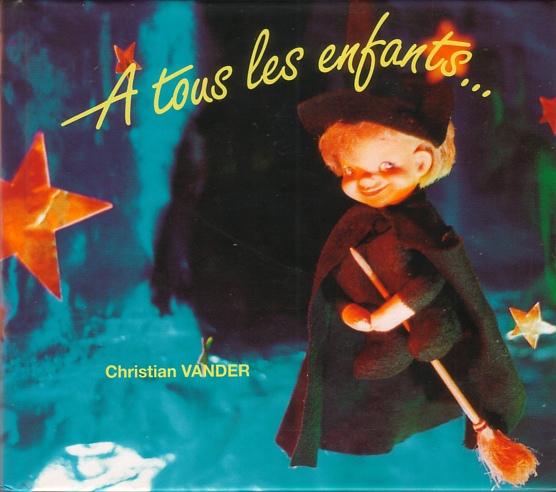 A children's album from Magma founder and leader Christian Vander? Precisely. I was more than a little skeptical when I first heard about this, and was even more hesitant to buy it when I heard the price of this elaborately packaged disc that comes complete with a miniature CD sized 40-page hardbound libretto of lyrics and illustrations. Nonetheless, if for no other reason than being a completist, I went ahead and made my purchase. It didn't take more than a couple songs to put my doubts to rest: This may be Vander's best album of the 90s. What we have here is a number of rearranged traditional children’s songs, plus a wealth of original material, 20 tracks in all, yet some are only a fraction of a minute in duration. The instrumentation is basic: one or two pianos with synthesizer coloring on most tracks, and four vocalists, including Christian and Stella, daughter Julie Vander, and Isabelle Feuillebois. Most of the lead vocals are Christian, who also adds some narrative on some of the tracks; his rich tenor voice on "Chanson des Oeufs" and "Hymne aux Enfants - Zoland" is moving; those two are worth the price of admission by themselves. For several brief interludes, a chorus of seven young children is employed (something to remind the listener that this is a children's album after all). The instrumentation and choral approach may often remind of Les Voix, the quieter parts of "Köhntarkösz," "Lïhns" from the live album, or some of the more relaxed parts of Wurdah Ïtah. In fact many of the tunes here evoke that same type of dark cosmic imagery. Four tracks in particular: "Ronde de Nuit," "Le Ballet des Sorcieres," "A la Claire Fontaine," and the absolutely stunning "Dodo l'Enfant Do" sound more like quieter tracks from a lost 1974 Magma album, seeming a mite dark for earthly children (but maybe not Kobaïan children...). And unlike recent Offering and Christian Vander Trio albums, there's not a shred of jazz to be found anywhere. In short, this one captures that spiritual vibe that made the classic period stuff so special. Highly recommended.

Packaged in a 40 page hardbound CD size book, A Tous les Enfants... is essentially a Christian Vander children's album. Playing keyboards and contributing vocals, Vander is joined by several other vocalists, including his wife and daughter, as well as a children's choir. The music is obviously very vocal oriented, and consists of short pieces interspersed with snippets of children's rhymes and some spoken interludes (in French) which are presumably some form of storytelling. The songs are a pleasant mix of cheerful hymn-like tunes and somewhat mysterious art songs, which at times are reminiscent of Magma's Le Voix performances. The voices are joined only by a simple piano accompaniment, and occasionally some other keyboard sounds. Though the music is somewhat simplistic, it is well composed and performed. Vander's solo vocals alternate with the shimmering female choir to create some very effective contrasts, and a few prominent melodic themes run throughout the album, tying all the pieces together. For the final track, Vander adds a pair of keyboardists and a contrabass, and dramatically departs from the gentle, restrained atmosphere of the rest of the album. "Dodo l'Enfant Do" collects all of the albums various musical themes and combines them into an intense eight and a half minute crescendo featuring all the ethereal, other-worldly mysteriousness of classic Magma. A Tous les Enfants... may not be the sort of album one would expect from Christian Vander, but it certainly maintains his musical signature as a composer, and thus makes for an interesting listen.

Vander's most recent release, and perhaps the most surprising. This is music dedicated to children, and written with the child in mind. The whole package is basically a children's book, well-made for collectors (hard bound, illustrated, etc). Musically, Vander's writing is a balance between light and dark, major and minor. The first song, "Hymne aux Enfants - Zoland" is one of the most beautiful, elegant, and simple melodies of recent years. In many ways this recalls the early works of Mozart or Brahms, where such deliberate simplicity is carried out by brilliant note selection. Vander sings, in French, "My name is Christian... I am your best friend." All the tracks are beautifully sung, with occasional children's choirs too. Perhaps most impressive, though, is Vander's mellowing voice and the ethereal Isabelle Feullebois and Stella Vander. Julie Vander also appears on this one. The backing music is almost all keyboard/synth/piano based, with a few guests on the last track. Magma fans may find that the middle passages of "Köhntarkösz", or perhaps "Lïhns" from the Live album are similar in sound and spirit to much of A Tous les Enfants. Also of particular interest is the last track, "Dodo l'Enfant Do," a surprisingly dark and sinister ending. Massive soundscapes sweep through the rhythmic pulsing that is the heartbeat of this music, which has been hailed as one of the best tracks Magma never recorded. All in all, this album is living proof of how simplicity can work better than complexity, in the hands of a craftsman as visionary and blessed as Christian Vander. Probably the best thing he's done since Magma, and a clear indicator that well has not run dry.