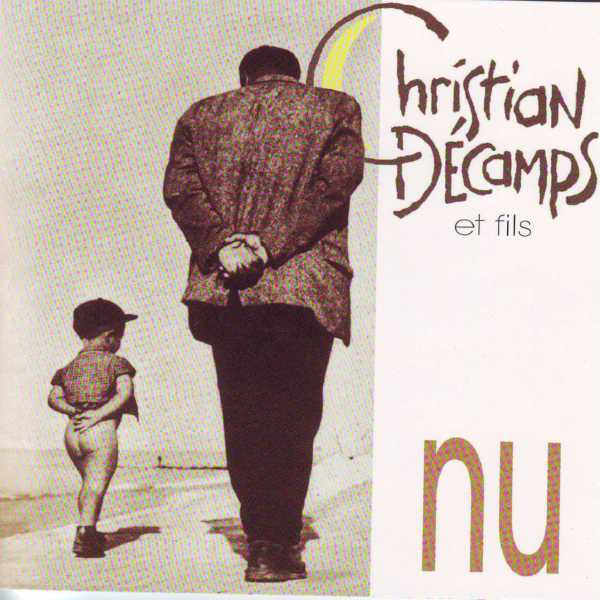 Nu is the a CD release by Christian Décamps, formerly of the French progressive band Ange. Joined by the likes of Jean Pascal Boffo, Décamps runs through 16 relatively short songs, most three to four minutes long. The musicianship and singing are outstanding but overall the music leaves me flat. Most of the songs seem to drift between early Human League, Yello, and The Teardrop Explodes without ever settling down. It isn’t until the CD is more than half over that things pick up. The three best songs are "Pierrot, la lune a soif" with its outstanding e-violin, "Les Clodos et Ventre-Blues" with its sexy sax, and "Paysans et cosmonauts" with its Gypsy violin. A nice touch in the booklet are the French cartoons accompanying the lyrics. Overall a pleasant suite of songs but nothing to get too excited about. One thing that does bother me is the inclusion of the photo of Décamps’ naked torso with a portion of his genitalia showing. I am by no means a prude but this photo is in bad taste, has nothing whatsoever to do with the music, and will needlessly offend some people. Thankfully you only have to look at Décamps paunch et al. when you open the case to take the CD out to play.

Décamps is, of course, the longtime lead vocalist and rock-poet emeritus of Ange, returning here to solo-career status (technically, Ange is still together - sort of - I have an album titled Les Larmes du Dalai Lama from 1992 featuring most of the original lineup, including both Christian and Francis Décamps). It should be noted from the outset however, this album is not Ange, nor does it even attempt to be, and in fact many progressive rock fans looking for the symphonic sounds of yesteryear may be disappointed to learn how modern - and in some cases mainstream - the music on this album is. That said, there is still much to recommend about this album, but it may not be immediately obvious to the non-French speaking listener.

More than anything, this is an album of songs and stories, personal and experiential, and the focus throughout is on the lyrics - Décamps as a solo artist could be compared to a modern day Jim Morrison or Harry Chapin, spinning stories about life, perspective, humanity, love, the complex character of the human experience from a very personal viewpoint. Décamps' emotional delivery carries much of the feeling, yet for some reason I was compelled to dig a little deeper, yet understanding only about every fifth word of the language limited my capacity for appreciation at first. With the help of some translation and a bit of studying and refreshing (all the lyrics are printed in the booklet) I was able to appreciate this album a bit more for what it was intended to be.

Musically, the songs cover a variety of styles, from a modern progressive to more pop oriented material. Décamps' right-hand man throughout is none other than the talented multi-instrumentalist Jean-Pascal Boffo (see our review of Nomades in Expose #4, or the review of Carillons elsewhere in this issue for more background). Christian handles much of the keyboard work, while Boffo plays most all of the guitars, basses, and programming, with Herve Rouyer on drums and percussion. Other musicians provide additional guitars, flute, saxes, violins and cello, and Christian's son Tristan provides keyboards on several tracks. The production, engineering and mixing are all credited mostly to Boffo, as well as all the arrangements. As such, the album is impeccably produced, every sound and voice precisely where it needs to be to maximize the intended effect of showcasing Décamps' songwriting and vocal talents.

The album opens with the sound of the old man's motorcar on "L'héritage," and his thoughts as he drives through the country to see his children on the night he will divide the inheritance. Thinking of his many years of scrimping and saving and living a quiet conservative lifestyle, he imagines how his three sons and daughters-in-law will put on their best show in hopes of getting a bigger piece of the pie - to get that passbook, the cottage in the country, the bungalow in Spain, and the power of attorney. He just wants to get the matter behind him - no arguing or disputes, no bickering among them. Décamps' voice conveys the urgency and internal desperation of the moment, and the sincere hope that things will go smoothly. The music here - a programmed sounding pop with synth and effects overlaid, some gripping guitar outbursts, with powerful chords placed in strategic places to accent Décamps' delivery - makes the song flow well and completes the picture.

From the point of view of the grandmother who is institutionalized, "Un Rien les Amuse" is an entirely spoken track focusing on the selfishness and cruelty of the younger generations - the parents who really don't want to be bothered with her, and the young children who laugh at her and poke fun - a very sad commentary indeed. "Sur les Plaines du Grand Manitou" ("On the plains of the Great Spirit") follows, projecting thoughts of a primitive human fantasy into the afterlife. This track, due to its musically overprogrammed digital feel and its lack of emotional delivery, is one of my least favorite here.

Not to worry, things get right back on track with "Le Chauffeur" - told from the chauffeur's point of view, with a dark Floydian musical perspective to match, of the old woman who has lost her son at war, once wealthy but now all alone after selling the factory, in need of money, her movie-like life ending in tragedy. "La Mort du Bon Côté" again further examines life, death, and the attitudes surrounding that transition, set to a light jazzy tune with flute provided by Gerard Delesse and Boffo's trademark bass sound. "Une à Une" follows, a powerful pop track with a spoken interlude that is quite hook-ridden and catchy, with a blistering guitar solo by JP, this is a sure bet to get some airplay.

"Cézanne, Ouvre Toi" is a soft and moving lament about the changes that have come about since Cézanne (Paul Cézanne, French impressionist, 1839-1906) painted landscapes of the beautiful Mediterranean countryside. The music here could best be described as symphonic and atmospheric, offering the perfect support for Décamps' lyrics and emotional conveyance. "Fanny," the album's only instrumental, follows directly out of "Cézanne," a beautiful atmospheric piece featuring Christian's keyboards and some classical guitar parts by Daniel Haas. The pace picks up again with "Pierrot, la Lune a Soif" ("Pierrot, the moon is thirsty"), a track that covers quite a bit of territory over its nine minutes, from its upbeat energetic beginning, featuring violin and cello (by Florence and Julie) with soprano sax by Gerard Delesse, through its overtly moody and symphonic end-section; here the music acts as far more than mere vocal support.

Next up is "Impasse du Moulin Vert" ("Blind Alley of the Green Mill"), a very personal (and cryptic) piece of poetry accompanied only by classical guitar. "Comme un Malentendu" continues on a very personal level, perhaps a poem to an estranged lover after a misunderstanding or disagreement, capably sung by Christian's son Tristan. Here the pace of the music picks up a bit with fuller arrangements for multiple keys and a rough-cut guitar solo as the song fades. Using poetic imagery, "Les Clodos de Ventre-blues" describes the life of the homeless, contrasting the differences between the beautiful life as portrayed in the movies and television, and the sad reality of their day to day life. Christian's voice and Boffo's arrangements work flawlessly to convey the desperation - along with an extended sax and guitar jam over powerful wall-of- sound keyboards, again featuring JP's trademark zeuhl-bass. The refrain sums it up: "Chiffons! Chiffons! Vieux papiers! Mourir en silence sur un coin de vie..." ("Old rags ! Old papers! To die in silence in the corner of life"). This is also about as close as the music on the album gets to the older progressive rock style of Ange.

Beginning with a folk melody on solo violin before kicking into a full-blown rock variation, "Payssans et Cosmonautes" alternates between this theme and essentially spoken verses, until the symphonic mid-section takes over with a beautiful and blistering guitar solo. "Cataline" begins with voice and solo piano, concerning the life and times of a prostitute, angry at life, screaming at the night. The song bursts into powerful rock after the second refrain, which carries to the song's end. The album closer is "Ame d'Homme" ("The Soul of Man"), an introspective yet lighthearted tune questioning modern values, the theories of science, the purpose of beauty, and so on. On each refrain he calls out to the fairy Melusine to help him sort it all out! Midway through, the music comes together into a more driving rock recalling the catchy style of "Une à Une," and supporting a more assertive vocal style.

In summary, this is essentially a vocal oriented album of songs and stories, with lyrics all in French. Although Décamps' voice goes far to convey the spirit of the lyrics, some elementary understanding of the French language is probably necessary to get the most out of it. The album covers a lot of territory musically, and one must certainly be willing to accept that this is not a purely progressive rock album, although most of the elements Décamps brought to Ange are still there, fully intact - his voice being stronger and better than ever. The packaging is good, the booklet full of illustrations, photos, humor and lyrics. Finally, much has already been said about Christian's "Autoportrait" on the back cover of the booklet, which is basically a nude photo from the chest down showing most of his pet snake. If this bothers you, just cover it up with a little sticker, or paint a fig leaf over it if you prefer, but surely don't let it stop you from enjoying the album - there's a lot more to this music that remains hidden, revealing itself slowly over time.