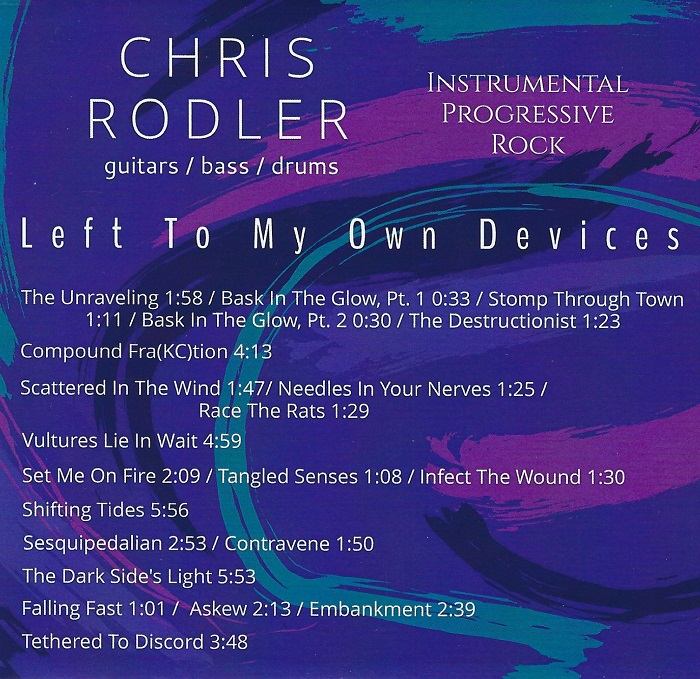 The 90s and early 00s would not have been the same without bands such as Drama, Leger de Main, Gratto, RH Factor, Mythologic, Andeavor, and Razor Wire Shrine. None of these bands lasted more than an album or two, but together they had an impact on the (re)developing progressive rock, math rock, and progressive metal scenes in the USA. All of these bands share one common denominator: Erie, PA based composer and guitarist Chris Rodler, who after 2009 more or less disappeared from view for about a dozen years, perhaps to make room for the other non-musical elements of living, or perhaps to retool, learn some additional skills, and thus become his own one-man band, which Left to My Own Devices appears to be the very first installment of. While the album packaging may not be anything special — no album art per se, and little more that a listing of the songs and times on the front cover and a short bio and email address on the back of the slipcase. Once the CD starts spinning, one will recognize this as something of a calling card for his ongoing work. The twenty instrumental tunes, many strung together into multi-part suites, don’t make any effort at concealing his influences, with track titles like “Compound Fra(KC)tion” for example. There are enough different ideas stirring in his cauldron that it's totally listenable, even with everything done using bass, drums, and multiple guitars in an edgy instrumental style. No keyboards, no vocals, just G/B/D, with effects as required and lots of solos. Other influences might include Rush, Zappa, Satriani, Holdsworth, McLaughlin, and others. While some might be able to say this is too heavy in the guitar flash department and perhaps a little shy on pure songcraft, it’s totally Rodler, and probably what anyone familiar with any of his previous bands (with the notable exception of Leger de Main, which featured a female vocalist / lyricist) might expect from this endeavor.