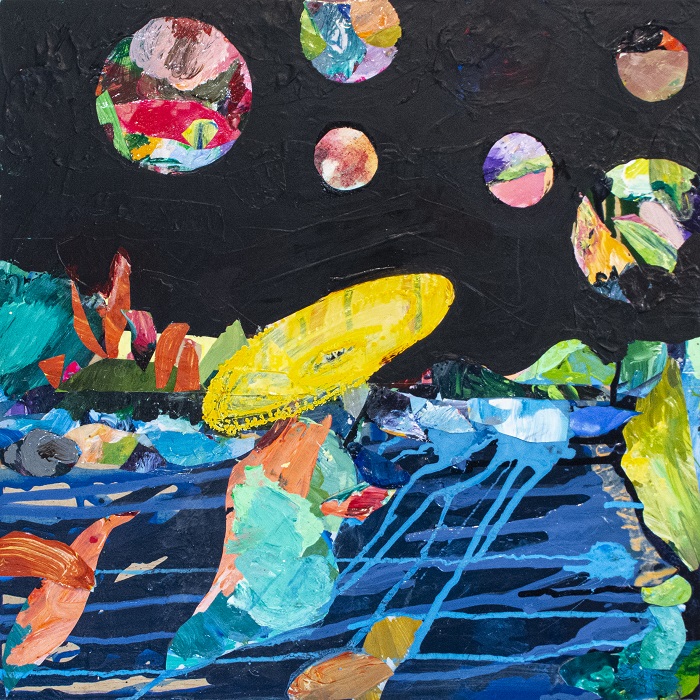 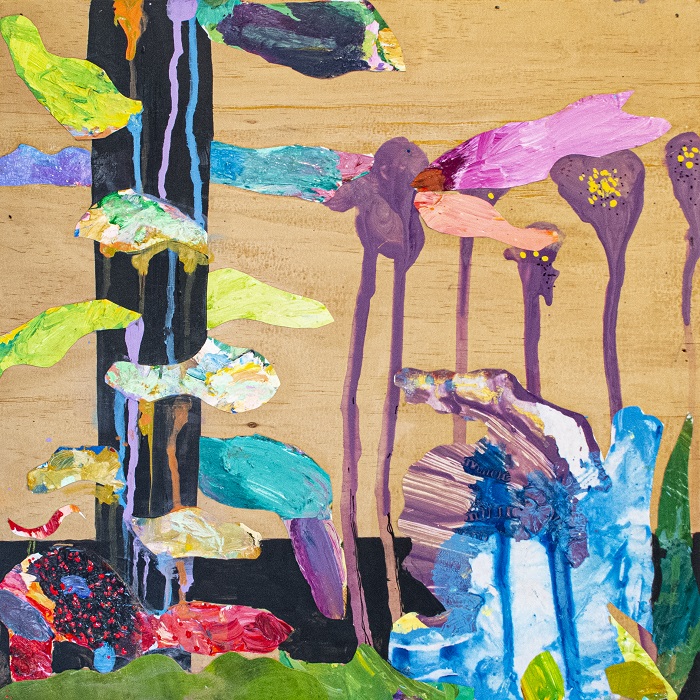 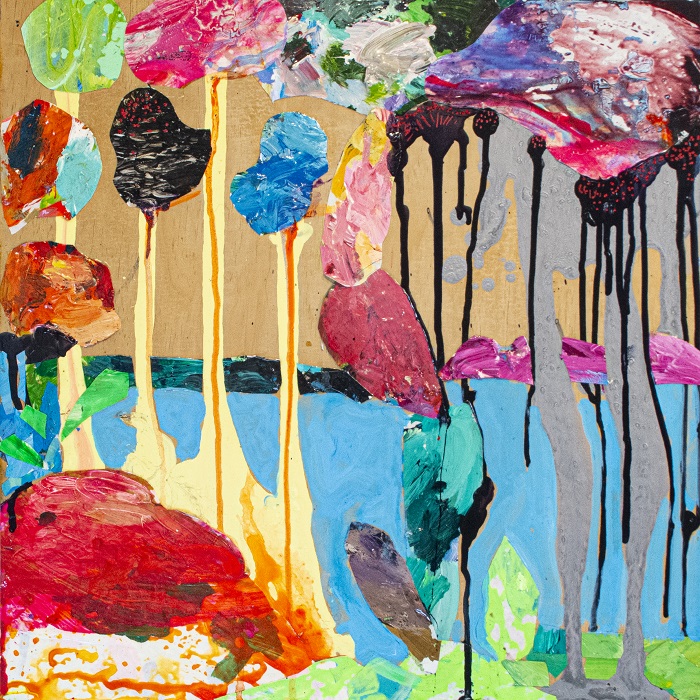 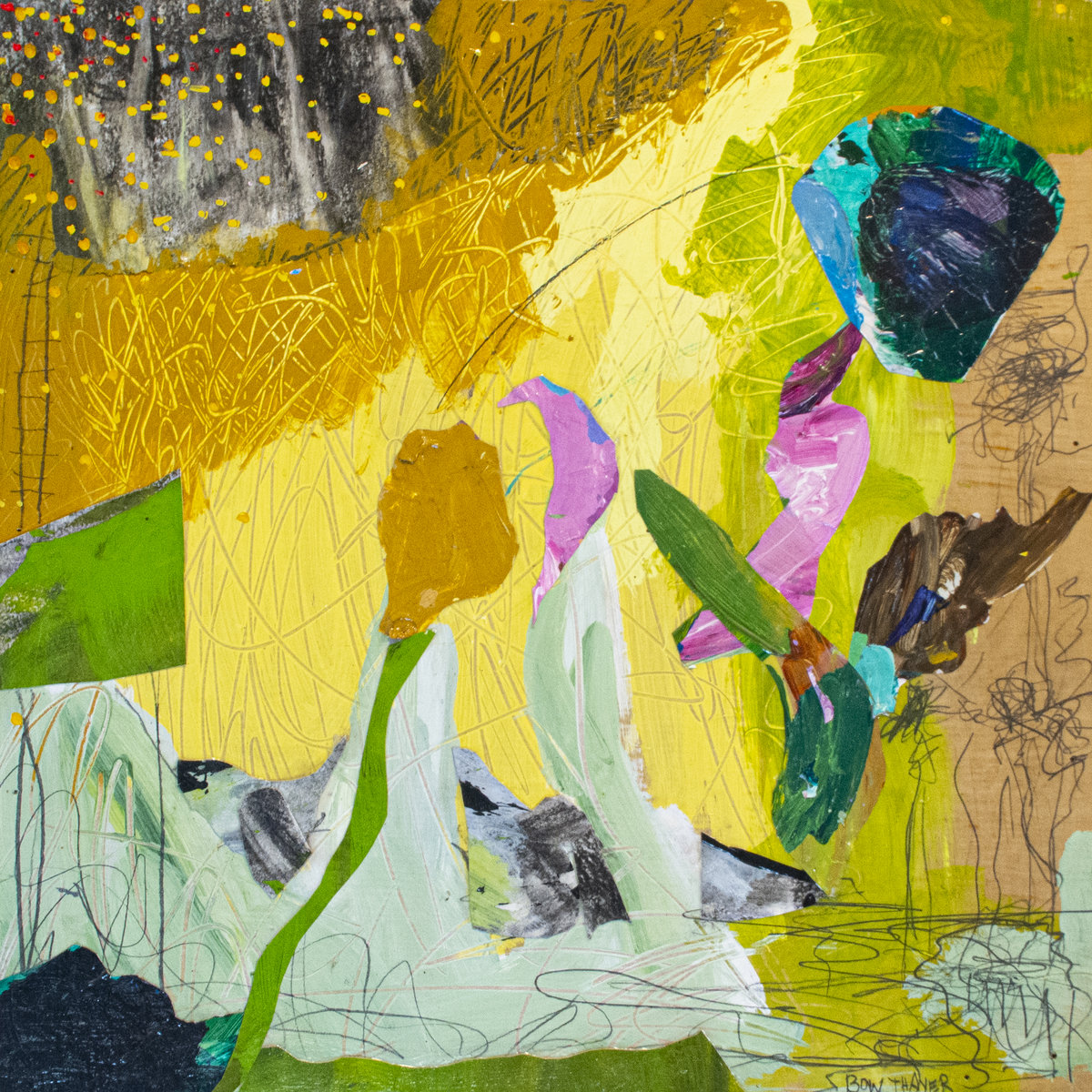 Choirs of Aether is the improvisational project of Vermont based musician Bow Thayer, a man who is involved with his own solo work as well as a number of other band projects (Elbow, The Benders, Perfect Trainwreck, etc.). He is also an instrument builder (best known for the hybrid six-string electric resonator banjo called the ‘Bojotar’) and a visual artist. The Choirs of Aether project started several years ago, originally assembled to present the music of Sun Ra at The Discovery Jazz Festival in Burlington, Vermont in the summer of 2017, which was performed as a six-piece ensemble live at the event, and released in 2018 as The Music of Sun Ra (Live at No Town). Fast forward to the spring of 2020, it’s a very different world for musicians, with a global pandemic on the prowl taking lives, there’s not a lot of opportunity to play out. Thayer reactivated Choirs of Aether as his vehicle for self-expression, this time playing all the instruments himself as he records numerous layers of stream-of-conscious music, playing all of the instruments he has at his disposal at his studio (includes all manner of guitars and banjos, several keyboards, drums, and much more), plenty of effects, and sometimes incorporating field recordings of wildlife and such for extra measure. The process sort of goes like this: around half an hour of music is recorded, then while listening to the track he turns his attention to the visual aspect, usually painting, and when new ideas coalesce, another track is recorded, followed by another review of the results and so on, a process that goes on until a satisfactory artistic union has emerged from the many layers of ideas committed to the process. The associated paintings are created as the recordings develop, and are ultimately used as the album cover for the particular soundpainting at hand. The first track on each piece is the complete improvisation, beginning to end, but the piece is then broken down into additional ‘tracks’ (with titles) that constitute radio-length segments. #1 is perhaps the most dreamy and ambient of the lot, there are percussion tracks but they are often obscured by heavy blasts of effected tonal color and textures over its 36 minute duration, at times fading out completely while undercurrents come to life at the surface, along with a number of bird calls and whistles joining the parade intermittently. It’s best not to try and figure out how the various sounds are being made, surely they are shrouded in effects so as to disguise the true source. The early minutes of #2 are probably the one place where stringed instruments (guitar, banjo, steel guitar, etc.) are most in evidence, gently following a wandering improv guided by an unobtrusive percussion track along its path to discovery and evolution. At 21 minutes #3 may be the shortest improv of the four, but the banjo swimming in swirling electronic effects that opens the piece eventually gives way to some cavernous percussion with an acoustic guitar and banjo weaving through the instrumental fabric as it proceeds. Perhaps the most sparse measures throughout the set are the opening four minutes or so of #4, with an interesting electronic drum loop acompanied by electric piano and some unusual sound effects percolating under the surface, but the density picks up before long and the listener is immersed in some unusual shifts and twists and bursts of melodic color delivered on piano, shimmering effected guitar, bass, and electronics. All taken, these four offer an introspective journey for the open-minded listener, and the price of admission can’t be beat.

Various Artists - To Cry You a Song: A Collection of Tull Tales – At first thought, this disc had the possibility of being not just another tribute album with renditions of classic songs by wimpy bands and weird line-ups. But as with some expectations, they can tend...  (1996) » Read more