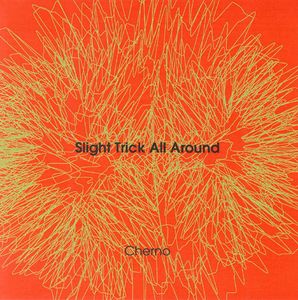 At its core, Cherno is the duo of Shin Sugawara (sax, wind synth) and Junichi Kishimoto (guitar, guitar synths, drum programming), sometimes joined by other players, track and disc depending (Trigonometric Reactor features a full-time percussionist as third member). These discs are comprised of recordings dating from ’96 hrough ‘02, apparently some of which may have been intermittently available on cassette at the band’s performances. Their sound is a noisy, edgy, hard-core instrumental rock (save some shouting by percussionist Chikatsu Matsuki on Trigonometric Reactor) informed by the more angular and abrasive elements of 70s King Crimson as well as equally brutal Japanese peers of more recent vintage like Altered States; although they do find room to wind down and get melodic here and there, for the most part this is pure smash-your-head-against-the-wall shredding hardcore noise-rock. Listening to one full disc of Cherno can require a bit of stamina (have the Excedrin handy), let alone three full length discs. Some of their material seems a little amateurish as well (both writing, performance, and production-wise), like improvisations that never find their direction, although that said, there’s plenty of stuff here that rises well above that level; I suspect that this is a case where the band decided to release everything they recorded at once, rather than culling the best tracks only for a CD release. The best material from all three of these discs would have made one helluva great CD, but instead we have three lengthy discs of varying quality.

The most notewothy aspect of Trigonometric Reactor is that it is a full trio with a live drummer on all tracks, and that “live” sense of instantaneous happening. Recorded in two sessions from 5/96 and 11/97, the tracks are all scrambled together. Tracks like “Ref,” “Blue and Red,” and “Black Thing” for example – although not direct rips in any way, could be considered stylistic descendants of “Larks’ Tongues Part II” or “Red,” though generally less interesting. “Dedicated to R.B.F.” is a floating ambient piece constructed with looping guitar-synths, and is really the only place on the disc where one gets a breather from the battering. Missing Illusion is the next, chronologically, taken from sessions in 1999. Here, the drummer is gone and all percussion sounds are programmed (although done respectably), so the music tends to change accordingly into more repetitive structures, perhaps bringing in some Pinhas influence; some of the hard edge has given way to cyclical melodic cells, and also less of an intense reliance on thrashy rock. Slight Trick All Around is from 2001-02 sessions, again with programmed drums, plus a couple guests on selected tracks. This time they go for a bit more strict composition, with some jazz influences creeping into their noisy style. The brutal assault of “Scarlet Panther” is some of the most relentless and noisy metallic rock imaginable, while the final three tracks “Dancing Stone,” “S.O.A.R.P.” and “Dancing Magma” probably represent the three best tracks over the entire three discs.

Little Tragedies - Sixth Sense – I am having a bit of difficulty identifying my issues with Little Tragedies' third release The Sixth Sense and I don't wish to sound negative. I have tried unsuccessfully on several occasions to...  (2008) » Read more