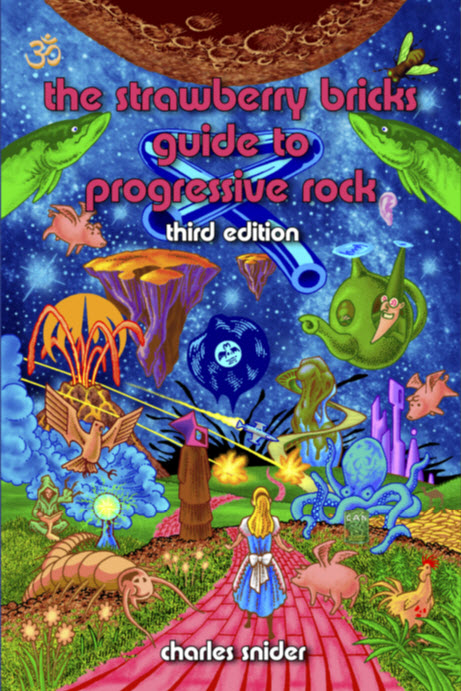 It’s hard to get a concise definition of what progressive rock is, and equally important, what it isn’t. Whether it be a style of music, or an attitude about music, or some other concept related to the music, everyone who claims knowledge as to what progressive rock is, has their own ideas regarding what qualifies as such, myself included. First off, I have never seen the first or second editions of Strawberry Bricks Guide, but this third edition has much to recommend, although for someone already well into this type of music, one has to wonder what the value would be. One might suspect that its value would be greatest to someone in the midst of the discovery process, who may know some of the recordings detailed herein, but certainly not all. For that person, the Strawberry Bricks Guide presents a fountain of knowledge that will open a listener's mind to other music of this type well beyond what they already know. The book is over 570 pages, with well over 500 albums reviewed; Snider’s reviews are very scholarly, interspersing the music at hand with bits of history regarding the artists, and quite often the review of one LP will also include information regarding other releases, before or after, by the same artist, which brings that 500 number up to a thousand or more. Another unique aspect is the order of presentation in the form of a timeline, beginning in 1967 with The Beatles' Sgt. Pepper’s and following a month-by-month timeline that finally ends with the first album by Asia in 1982. Through this, the reader, who might have not even been alive at the time, can experience the development of progressive rock as it unfolded through the years, up to through the end of the timeline, at which point it’s clearly past its sell-by date and on life support. It’s an innovative way to present the music, and one that does it far more justice than the encyclopedic approach.

The author sets his limits early on in the section preceeding the timeline, that progressive rock began as a British phenomena and includes only those artists who were British, or European and American artists influenced by British progressives during the timeline presented. Sad, then that the first US entry is Kansas’ Song for America in 1975, all of the rich bounty of US progressive music prior to that (Zappa, CTA, Byrds, Kaleidoscope, Spirit, HP Lovecraft, It’s a Beautiful Day, Touch, Santana and many others) are summarily ignored, though to be fair, this book is already close to 600 pages – add that stuff in and it would be approaching a thousand pages or more. So the author has defined the limits of coverage, and as such he has done a superb job covering the most important releases from that period. In the Epilogue section the author quickly summarises the period from 1982 to the present in about 14 pages, with quick mentions of Marillion, Porcupine Tree, and many other next-gen prog bands, as well as his section on prog festivals that brought many of the old bands back from the dead for reunions, playing alongside newer underground bands copping prog styles from an bygone era before they were born. In summary, this is an excellent, innovative and scholarly approach that analyzes the timeline of the progressive rock era.

Roger Powell - Cosmic Furnace – This legendary album from the early days of electronic music is a welcome reissue. The overall sound is a bit unusual because of Powell’s use of ARP synthesizers rather than Moogs. The tracks...  (2006) » Read more