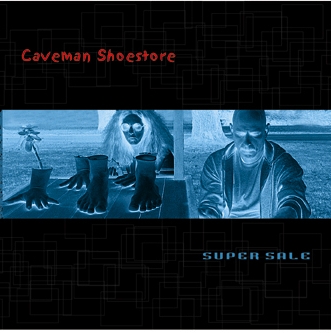 Caveman Shoestore is back and ready to take on the modern indie rock and roll jungle. The basic trio structure is intact driven by Elaine Falco’s obtuse songwriting and lead vocal, Fred Chalenor’s world-class bass playing and the group’s most engaging arrangements to date. Falco clearly picks up right where she left off with her Robert Wyatt influenced imagery as heard on the best realized collection of her songs yet. The lead track is a strong indicator: “Since the 11th” features layered Fender Rhodes that intertwines with Falco’s multipart vocal lines; Chalenor’s fuzz bass presence across the disc shows an underlying nod to bass master friend Hugh Hopper. A few surprises are also included such as “90/30” which sounds like an outtake from Charming Hostess vocal efforts. The six instrumental pieces vary dramatically: “Pan the Goat God” relies on unison keyboard and bass lines to drive a Soft Machine Vol. 2 style rhythmic structure while Chalenor’s “Two Freaks Cruising Lombard Listening to the Ventures” is a sweet swing jazz take. “How the West Was Wrong” shows the trio in free jazz mode for the intro before diverging into another mysterious Fender Rhodes led section. “Hoverlude” is no doubt a small nod to bassist Hugh Hopper with its intricate piano passage and Falco’s most distinctive vocalese. The end results of the fifteen vignettes are a strong, diverse entry into the ReR fan base now that there is a foothold in Denver.