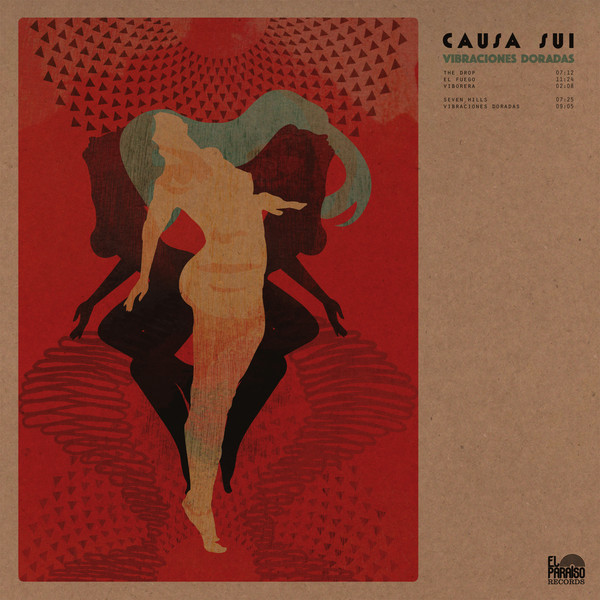 Every time a new album comes out by this Danish instrumental rock powerhouse I expect to be blown away by it, and I always am. Somehow I missed reviewing 2016’s Return to Sky, which is easily as good as this latest one, which came out following a 3LP live album Live in Copenhagen in early 2017 (which I have not heard to date, but like I said before, I am certain I would be easily won over within the first minute of the first cut). At any rate, 2017’s Vibraciones Doradas is the subject at hand, four long tracks and one short one, totaling around 37 minutes, just right for release on both LP and CD, which is the way they release all their albums of late. Causa Sui’s stock in trade is the big extended riff, with monster hooks and brutal force, full of heavy guitar fuzz and thrashing bass and drums. For old timers like myself, I am sometimes reminded of Armageddon, the post Steamhammer band from the mid-70s with Keith Relf, except Causa Sui dispensed with vocals way back around 2007, after their second album Free Ride. Since then, they have been pretty much instrumental all the way, with the current lineup being guitarist Jonas Munk, drummer Jakob Skott, bassist Jess Kahr, and keyboardist Rasmus Rasmussen, and occasionally joined by guest players. The opening track, “The Drop,” is a brutal monster that takes no prisoners over its seven minute duration, the guitar lead hook grabs you immediately, and at the opening it almost sounds like there are two drummers going at it. Some gentle and dreamy moments come in around the five-minute mark and take the song to its eventual fade-out. The two-minute “Viborera” at the end of side one of the LP is basically an electronic and keyboard guitar groove, sounding similar to some of Richard Pinhas’ endeavors. “Seven Hills” starts the second side, and like the opener, gives the listener a good ass-kicking, with ascending guitars screaming over a growling bottom end, and swirling electronics engulfing everything in a freewheeling jam style that offers hints of classic Ozrics without their delicacy. The title track closes the disc starting with a heavy, sludgy power riff that could easily be from Black Sabbath’s first album, but after about four minutes begins to evolve into something more interesting, with Munk building a new mountain of guitar sub-sonics and catchy riffage. Another must-hear from Causa Sui.