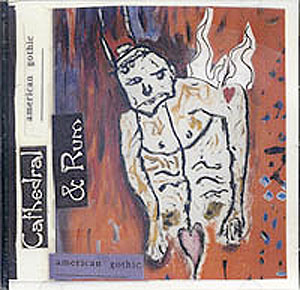 The follow up to Cathedral & Rum’s 2000 debut finds Chris Hartford and friends on familiar ground. The dreamy, country and western tinged alternative pop sound is intact, all wrapped around Hartford’s languid and yearning drawl and acoustic guitar. It’s not hard to see that he’s an exceptional singer and songwriter, and every piece on the album has much to offer. Lyrically Hartford is simply superb. He again seems to be taking on topics and places personal to his experience (he resides in San Diego) with titles like “City of Ice,” “Lullaby on a St. Charles St.” and “Glass Bottom Town.” Besides a stronger country vibe to this collection, Hartford has chosen to augment nearly every song with instrumental enhancements that include accordion, flute, strings, and sax. Backing vocalists Jean Jenkinson and Sierra Hart harmonize wonderfully with Hartford with an effect not unlike Dwight Yoakam paired with Emmylou Harris. Less effective are occasional psych effects mainly supplied by Stick player Colin Jenkinson. Like the previous album, I find some of the Stick work inappropriate to the warm and intimate vibe that runs through the songs. Still, the occasionally off-kilter elements, like mixing some of the instruments slightly out of sync or the inclusion of sound effects that lay just above the aural threshold, work to reinforce the sense of weary melancholy inhabiting the album. It’s another very strong collection and I wonder when Hartford will finally be noticed and given a bigger stage to present his songs.