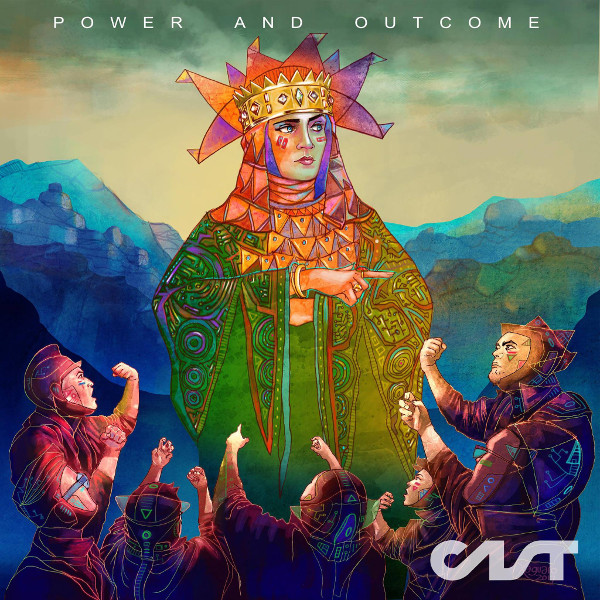 Seems like it’s been a while since the last release by this outstanding Mexican symphonic prog band, but after further investigation, apparently a couple releases came out in the last few years that I wasn’t even aware of (Arsis, from 2013, featuring three long tracks including the half hour instrumental "La Iliada", and Vida from 2015, mostly a reworking of early Cast material by the current version of the band), so fast forward from Cast Art (the last one I’m familiar with from 2011) and here we are in 2017 with Power and Outcome. Every new album by Cast is always full of great surprises, and this one definitely has more than its share, from the amazing eleven-plus minute opening instrumental (save a couple measures of whispered lyrics) “Rules of the Desert” to the closer “Dialect for the 21st Century,” mostly instrumental again, with some thoughtful lyrics by Rene Vidales who penned most of the album’s English lyrics. The band now features seven members, with bandleader, keyboardist, and composer of all ten tracks Alfonso Vidales, his son Bobby Vidales as lead singer, wife Lupita sings additional vocals and chorus, long-time drummer Antonio Bringas, guitarist Claudio Cordero, who turns in some amazing solos throughout, and returning guitarist-turned-bassist Carlos Humaran, who hasn’t played on a Cast album since 2006’s Mosaique. The newcomer to this lineup is violinist Roberto Izzo, replacing departing saxophonist / flutist Pepe Torres, giving the band a somewhat revised sound without the woodwinds. But through their entire career, Cast has has always featured a revolving door of great musicians and singers, some leaving for a period and then returning, and there’s no reason to think the changes will stop here. Alfonso Vidales is a masterful composer, and throughout Power and Outcome the ten tracks bear this fact out, with numerous instrumental sections of remarkable brilliance, great melodies throughout, and band arrangements that suit the moment perfectly. The now prominent violin is constantly intertwining with keyboards and guitar, giving their sound a fresh new face. The many vocal passages, which tend to be secondary to the many instrumental passages, do provide a solid link to the Cast of 22 previous albums. Here’s to a great band that continues to re-invent itself.