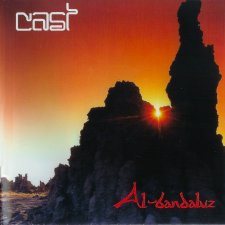 By this time, many readers will know what to expect from Mexico's Cast: complex, keyboard-heavy neo-progressive with lots of odd meters. They've stuck to that for what seems like twenty or thirty albums in the last ten years, so maybe we shouldn't expect much different. The bad news is that this new double CD stays within that established format. The good news comes in two parts. First is that they do what they do very well. They have this style down, and few bands can top them at their game. The other part of the good news is that their sound is given a little twist, partly due to some personnel changes. Keys man Alfonso Vidales is still in charge, but guitarist Carlos Humarán has a more aggressive style on electric that gives the music an added punch. Lead vocals are still handled by former guitarist Francisco Hernández, with Vidales and Humarán backing him up. The new rhythm section of Kiko King (drums) and Flavio Jiménez (bass) handle the elaborate arrangements and meter changes with fluid grace, even if their playing rarely jumps out and grabs attention. Fans of lush keyboard work will find much to love here, as the arrangements load up an embarrassment of riches, maybe even too much at times. Piano, organ, and string sounds dominate, with lots of other synths as well, and if I have one complaint it would be to wish for more moments of quiet and simplicity.