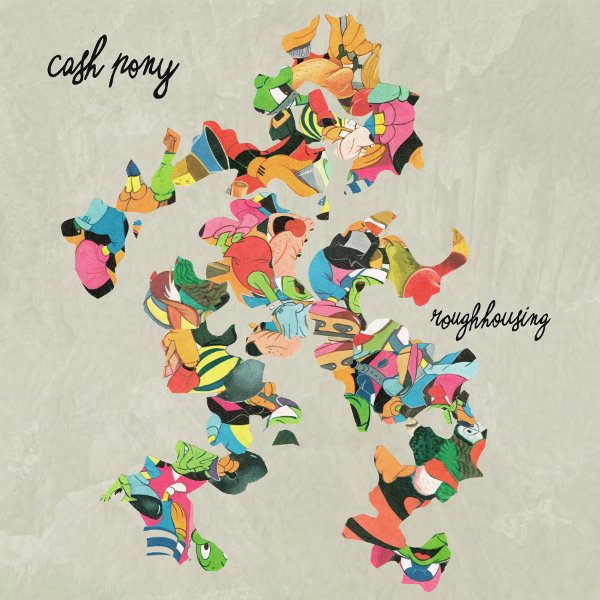 Cash Pony is a San Francisco Bay Area quartet (Oakland, to be precise) with previous releases going back to 2012. However, this is the first one I’ve had an opportinity to listen to. They don’t take the easy road, instead opting for an all instrumental approach, the music alone must speak for itself, and on the eight tracks on Roughhousing it surely does. All of the compositions are band-written, the band being drummer Gabe Katz, Steven A. Wright on bass and oscillators, Owen Kelley on guitars, and Charles Lloyd on guitars and sitar. The opening three cuts demonstrate what the band can do wth a dual guitar lineup, following essentially a progressive rock style with strong jazzy elements, meaning plenty of changes with stytlisic turns and twists maintaining an overall deep interest, where nothing ever repeats for too many measures before it morphs into something completely new. “Shibboleth” especially combines the jazzy elements with some bluesy guitar interplay over a punctuated and somewhat challenging rhythmic trippiness. Track four, otherwise called “Little Muddy Creek,” is where they break out the sitars and the complexity of jazz-rock suddenly morphs into an eastern flavored mystical soundworld. There is still a strong folky and bluesy streak within it all, but surely we have moved to someplace high on the mountain that wasn’t visible from those early tracks; it grooves, it beams, and it mixes things up for a high level of interest throughout its six minute duration. Onward to “Ahnighito,” the next piece of the journey that, while it builds up to heavy electric rock, begins in more gentle territory and returns there as a reference point with regularity. Some beautiful overdubbed lead guitar runs near the end of its three-and-a-half minute duration may well be the high point of the cut. “Moon Mobile” builds out on strong percussive elements, again with sitars in tow, always a good thing. The album closer “Nature Study” is unlike all before it, blending speedy licks, snarly rock and clever bits of happy jazz in an effective stew that is constantly on the move, always covering new ground as it goes, with occasional revisits to the original themes that started it all. Overall a great album that must be heard, but won’t be found on any physical medium at this point in time at least, download-only from the band’s Bandcamp page, vinyl promised.