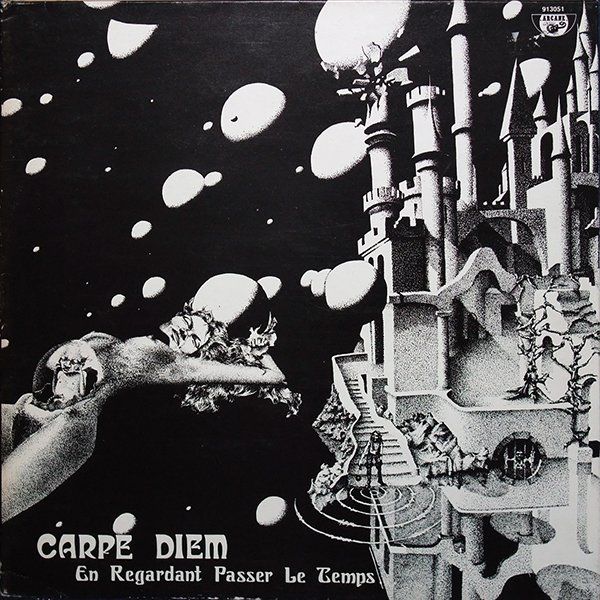 This may be one of the longest anticipated CD reissues of all time for progressive rock, the great Carpe Diem's debut album. Hailing from Nice (home of Shylock, Step Ahead, and Visitors), this quintet produced two albums of very high quality, before being lost in the turn of the decade. En Regardant is a supremely excellent example of progressive rock and especially of the French scene, on par with the greats — Atoll, Shylock Île de Fièvre, Pulsar Halloween, Arachnoid, Terpandre, and Artcane Odyssée. It took hints from the past and combined them to express something new and unique. Carpe Diem had their roots in the early English style — King Crimson, a little Van Der Graaf Generator, East of Eden, and to a lesser extent Marsupilami — yet their music was undeniably more of a result of the French culture with a sound that reminds one slightly of Gong or Moving Gelatine Plates. Their music was spacey and atmospheric with that rare sense of professional restraint that only the classic symphonic groups has like PFM, Banco, or Ezra Winston. The result was a slightly jazzy and very spacious music of a fragile and delicate nature, yet with a sense of power that grows behind the complex musical structures. What makes this album's four tracks great is Carpe Diem's refined sense of melody, which reminds one of the great moments of their contemporaries like Shylock or Arachnoid. Often their melodies are very harmonically rich with three parts from keys, sax, and guitar. I could go on and on — this album is superb and essential, a classic that has surely stood the test of time.

Here we have Carpe Diem’s long awaited excellent debut album from 1975, studio enhanced and reissued on CD. Despite the Camel and Genesis influences, Carpe Diem created a complex, lyrical, and subtle music blending rock, classical, and jazz themes. The keyboards and saxophone are simply outstanding. Musea faithfully reproduced the original album artwork correctly achieving the ‘mirror’ effect the artist intended, but didn’t accomplish, on the original gatefold sleeve. This M. C. Escher styled black and white art also appears in all its glory on the CD. Despite this excellent packaging, there is one minor error. Musea got the timings right but the song sequence wrong in the booklet. The correct song sequence is "Voyage du Non-retour," "Reincarnation," "Jeux du Siecle," and "Publiphobie." En Regardant Passer le Temps is one of the foremost examples of sophisticated French rock and should not be missed by the serious collector.