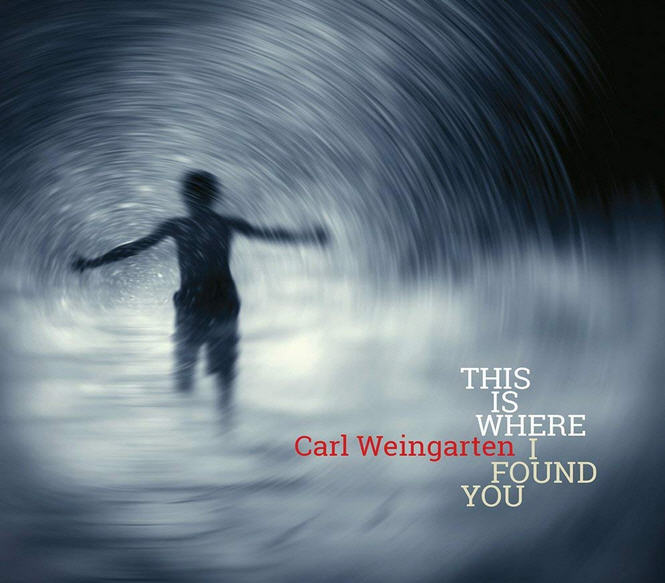 Some artists have a uniquely identifiable sound, just the combination of composition, playing style, choice of arrangements, and overall production. So even though Carl Weingarten works in a variety of styles, This Is Where I Found You is instantly recognizable as his work. The players across these nine tracks are the same as many of his albums going back to Blue Faith, which contributes to that idemtity, with Weingarten himself playing acoustic and electric guitars including dobro, with slide and eBow, sometimes with looping, and composed all nine tracks, two in collaboration with others — keyboardist Ulrich Schnauss for “Deittaloo” and keyboardist Peter Calendra on “Sliding Through,” the latter a dreamy piece with second guitarist Patrick Duffey (who also plays on most of the other cuts here) supporting the effort, with a bold slide lead melody working into an unforgettable melody. Along with Duffey, veteran drummer and percussionist Celso Alberti, fretless bassist Michael Manring, as well as Kit Walker on piano and synths are the core of the group featured on nearly every track, and although there are no lyrics, Tate Bissinger adds wordless voices on three of the album’s cuts, beautifully following Weingarten’s eBow on the powerful opener “Sing Like Water” and the fluid and beautifuk “Kites and Waves.” The style overall is somewhat cinematic, melodies throughout are subtle, and somewhat jazz-infected at times, but remarkably catchy. I’ve been waking up nearly every morning for the last three weeks with some melody from this album playing in my head, after which I need to play it again in order to positively identify the track. “The River King” is a beautiful piece with a stripped down arrangement for acoustic guitar, Manring’s instantly identifiable melodic fretless bass, and some subtle drums and percussion from Alberti. My favorite of all comes at the end: “Bunk Beds” is a intenesly melodic piece with a catchy rhythm as well, the unforgettable opening melody supported by an extra vocalist and keyboardist Troy Arnet, then moves into a seeminly improvised centerpiece of guitar and piano, with a second pass through the opening melody following; simply beautiful, perhaps one of the strongest pieces Weingarten has ever composed. Throughout the entire disc, every cut is nothing short of remarkable, one I can heartily recommend.