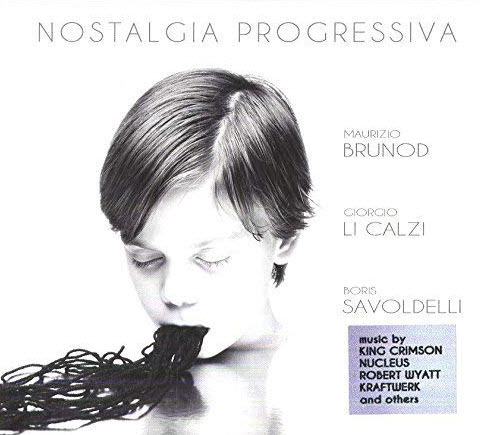 What might one expect from these three Italian jazz musicians covering (mostly) progressive rock from the late 60s and early 70s? It’s certainly not what might be considered retro in any way, in fact these three take a dozen classic cuts, reinterpret them, and propel them into a fresh new existence. Guitarist Maurizio Brunod has a very active career, with over two dozen albums to his credit (both as solo / bandleader and collaborations), and as many more credits, all starting in the late 80s. Giorgio Li Calzi, who here plays trumpet, keyboards, and electronics, is a composer and producer better known for his work in radio and television, but has a half dozen releases to his credit since the early 90s. Boris Savoldelli (who is credited here with voice, instruments and electronics – which covers just about everything) should be known to Exposé readers from his participation in the Pink Floyd tribute The Great Jazz Gig in the Sky, as well as his Moonjune solo release Insanology from a few years back. But that just scratches the surface; he has played and sung on numerous albums by the avant-garde group S.A.D.O. (stands for Società Anonima Decostruzionismi Organici) and Indonesian keyboardist Dwiki Dharmawan, as well as collaborations with Elliot Sharp and others. There are ten cuts on Nostalgia Progressiva and a full half of them are reworkings of King Crimson material, starting with opener “Formantera Lady,” not one of the greatest pieces in Crimson’s canon in my opinion, but here the trio takes the piece and breathes a whole new life into it, easily outdiong the original, refocusing the piece on vocals and atmospherics. Following that is their version of “Matte Kudasai,” in a truly alternate invocation of the original, with Savoldelli’s voice and Li Calzi’s trumpet pushing the piece forward over Brunod’s guitars. Originally the closing track on the Beatles 1966 classic Revolver, the oft-covered “Tomorrow Never Knows” makes an appearance here in a more simplified form with layered vocal effects and electronic sounds offering the highlights of a truly psychedelic creation. Kraftwerk’s 1975 classic “Radio Activity” is here, driven by acoustic guitar and electronics, moving Savoldelli’s voice to the forefront, making this version sound much more enticing than the original, more like something from Pink Floyd’s mid-70s classic Wish You Were Here. Other Crimson covers include “Moonchild” (another improvement over the original), “”Starless,” and “I Talk to the Wind” fused with Nucleus’ 1973 smoker “Roots.” The only Italian vocal piece on the album is the closer, Le Orme’s “Gioco di Bimba” originally from their 1972 classic Uomo di Pezza. While most of the pieces here are relatively familiar on a compositional level, a listener can’t help but realize that this trio has gone out of their way to attempt to make each one of these pieces outshine the originals, and in most cases have succeeded.

Mani Neumeier - Sketches – When you hear the name Mani Neumeier you think of his body of work with Guru Guru and his zaniness in concert. In addition, when you hear that he has released his first solo album, Sketches, which he...  (2008) » Read more