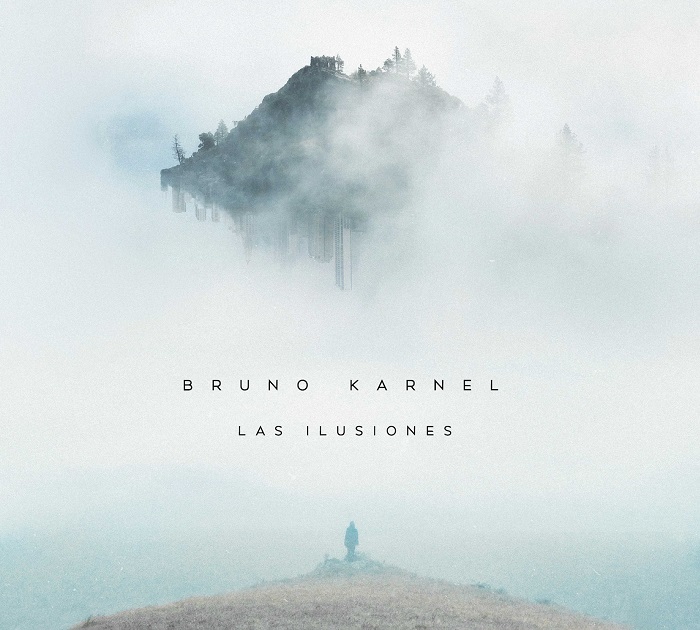 A couple years ago we reviewed Amra, Karnel’s collaboration with modular synthesist Frédéric Gerchambeau, followed a year later by Karnel’s Evaporation des Voix Off, a “lockdown live” event with Karnel singing and playing along with pre-recorded backing tracks, bassist Julien Wagnon, and backing vocalist Sonia Lambert. Karnel’s latest, Las Ilusiones (The Illusionist), pretty much uses the same formula; except for a couple tracks where bassist Antonin Smirr plays, and one with guitarist Ricardo Da Silva, Karnel sings and plays all the instruments (keyboards, bass, guitars, saz, mandolin, domra, charango, saz, percussion, and drum programming) with Sonia again offering backing vocals on most tracks. The lyrics here are mostly in French, though he offers a lyric sheet to follow along with, as well as English translations for every song, save “La Noche se Achaplina” the album’s only instrumental. His style is simultaneously bright and dark, track depending, with heartfelt lyrics and very interesting arrangements, especially with all the unusual instrumentation, perhaps reminiscent of a French answer to Peter Hammill — the inflience seems to be there, and the progressive stylings of most of the fourteen songs underscores that connection. Standouts here include the symphonic progression of “Vlak!” where the poetic lyrics are driven by strong keyboard advances, the dark and perilous “Nuevo Eden” where the aforementioned PH influence seems to be at the fore and at its core. “Chant de Nezahualcóyotl” is a traditional, adapted from a poem by a prince of the same name from ancient Mexico, sung in its original language, Nahuátl. The beautiful charango into to “Medialuna” (and throughout the song) make it one of the most interesting pieces here, but it rocks hard as well once Karnel’s electric guitars and Smirr’s bass join the mix, but the even harder rocking “Fernweh” follows it promptly. Las Ilusiones features a bounty of outstanding songcraft that with both surprise and mesmerize as it proceeds.