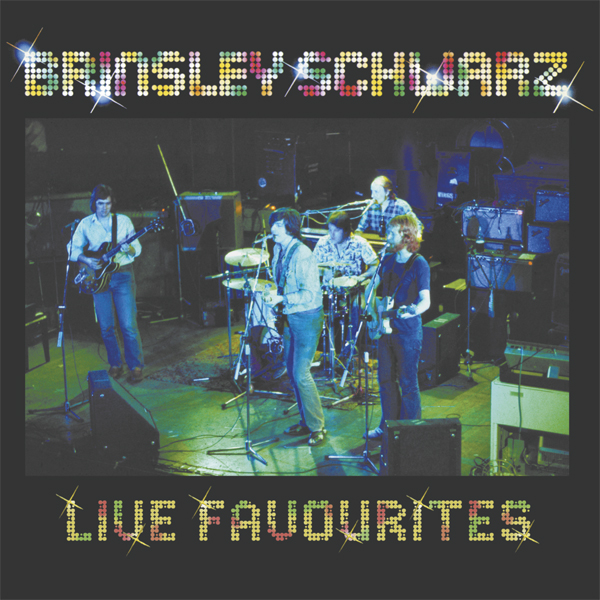 Brinsley Schwarz were a Brit pub band from the early 70s, named after lead guitarist Brinsley Schwarz, but mostly known for their bassist Nick Lowe, who went on to considerable success as a solo artist and producer. They released their first two albums in 1970, two more in 1972, a third in 1973, and their final LP in 1974. They were a well-respected band, but through a series of mishaps, they never received the recognition they so justly deserved. Their final album was produced by Dave Edmunds and after release, they broke up in 1975. Just prior to the release, they performed live at the Top Rank Cardiff on June 19, 1974. They were in rare form that night and through the efforts of Mega Dodo we can now relive that live show. Live Favorites features a mix of cover tunes, originals, and a few tracks that appeared on their final album The New Favorites of … Brinsley Schwarz. On this summer night, the band consisted of Brinsley Schwarz (guitars, alto and tenor sax, vocals), Nick Lowe (bass, vocals), Ian Gomm (guitars, vocals), Bob Andrews (keyboards, alto sax, vocals), and Billy Rankin (drums). The concert is a mix of R&B and blues rock, with one C&W song thrown in for good measure. Of note are Nick Lowe’s bass playing and Bob Andrews outstanding Hammond organ riffing. I note all kinds of comparisons: J. Geils Band, Doug Sahm for the country blues numbers, Buddy Holly, Al Kooper, Dr. John, Brian Auger, and Bruce Springsteen. Most likely you will recognize Nick Lowe's song that became a hit for Elvis Costello, “(What’s So Funny ‘Bout) Peace, Love, and Understanding.” This live version is superior to Costello’s. The band locked into a groove that night and the crowd loved them! I have not listened to music like this in a long time, so it was a welcome change. The party-song nature of many of the tunes demonstrates why they were so popular as a pub band. This archive recording is well worth investigating.