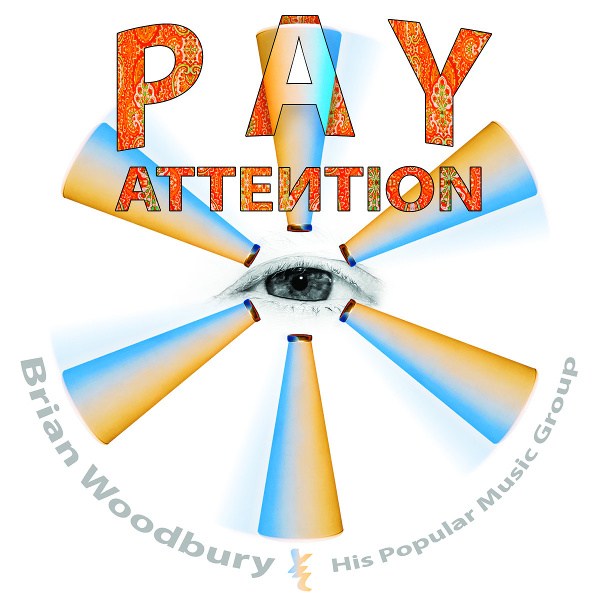 It’s one thing to have that exceptional ability to fuse humor and witty lyrics to great music – Zappa, 10cc, Ray Stevens, Weird Al (though rightly, Yankovic’s material would more correctly be classified as parody) and many others come to mind in the field of those who have done it successfully with repeatability over the years, but it’s all together something else to be able to do it while genre hopping all over the musical map with highly original material. Woodbury’s abilities first came to my attention with the 2004 reissue of his 1988s release All White People Look Alike, which I believe was his debut album under his own name, and even at that early stage there was a lot more substance than promise to his songwriting abilities. Now, 27 years and a half dozen albums on, Woodbury’s masterful songwriting and brilliant arrangements have resulted in Pay Attention, what may well be his best work to date. There’s a lot here we could talk about, like “The Real World” where Woodbury takes down every conspiracy theory with spirited country backing, or “Every Lousy Band,” where the refrain “When every lousy band in the world disappears, that will be music to my ears” is something we all may have thought at some point, but never had the courage to sing about. And then there’s “Brother Can You Spare a Diamond Ring,” and a lot more, but I don’t wanna spoil the fun of discovery. Eighteen tunes in all, you can listen to them all on his site and follow along with the lyrics. Although Woodbury can play just about any instrument one can think of (here he’s credited with vocals, guitar, banjo, mandolin, bass, keyboards, harmonium, ukulele, and more, track depending), for this endeavor (His Popular Music Group) he has assembled a who’s-who of session players including drummer Andy Sanesi, Marc Muller (electric guitar and bass, track depending), bassist Dan Lutz, and many others too numerous to list here, including some rapping and sax from our friend Johnny Unicorn, whose work we have covered may times in these pages. So there you have it: it’s quirky, witty, artful and sometimes poignant, covering the pop and country spectrum. No words I can spill here will faithfully and accurately describe what Woodbury has done, so best go to his site and check it out for yourself.

Chris Béya Atoll - Illian, J’entends gronder la Terre – There are several reasons to expect the worst from this release. Many “reunions” and “reformations” of bands from the 70s have not turned out well; a look at the credits shows...  (2005) » Read more