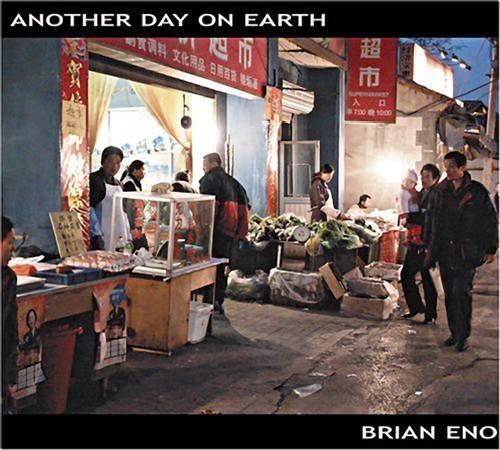 Brian Eno’s first set of new songs is a welcome follow-on to his collaboration with John Cale, Which Way Up. The opening cut, “This,” begins the subdued eleven song set and it is a clever menagerie of synthetic percussion merged with a pop friendly melody. The composer’s lead vocal has always has been understated, but over time his singing has matured and is the key focal point for the listener. The mode of operation on the disc is to create slow linear excursions that are both relaxing and low stress. Most rhythmic arrangements center on a casual but insistent synthesizer that lulls the listener into a pleasant dream state as on “Going Unconscious.” Less successful are the quietly shimmering pieces such as “Caught Between,” which are nice enough but too similar in style to other tracks. In contrast, “Passing Away” relies on a ragged recitation to create a bleak mystifying statement: “Gone through crumbled fingers gone, can never be recollected.” “Under” is a reworked piece from the My Squelchy Life sessions that works well here as an up-tempo track. In summary, most long-time Eno fans may be disappointed to hear their New Wave hero smooth out the all the rough edges. On the other hand maybe just a few of our cherished icons have grown up and moved on.