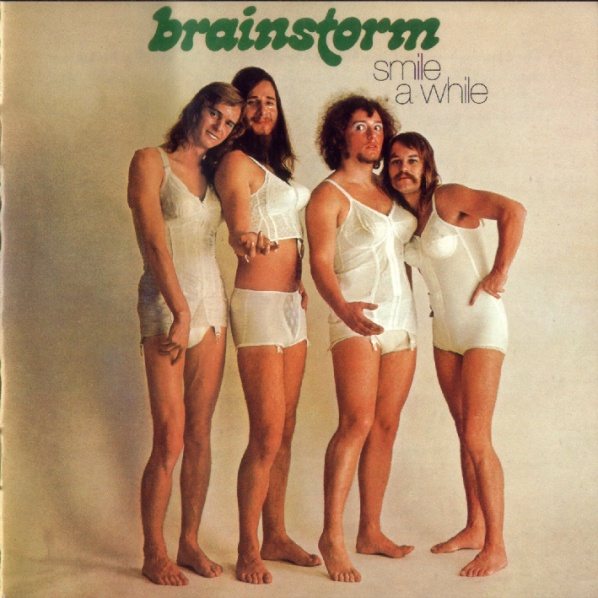 German guys in foundations and girdles? This is one of those albums that will immediately catch your eye as you browse the CD racks. Not being aware of this band or album I was skeptical of their music after noticing the fetching figures cut by the band dressed in lingerie. Was Brainstorm a trend setting band that set the stage for glam rock? Probably not. Instead they were one of Germany’s best progressive bands from the early 70s playing a complex and harmonically rich jazz-rock music like that produced by Moving Gelatine Plates, Soft Machine, and Caravan. Brainstorm’s music is characterized by Ronald Schaeffer’s killer distorted sax solos, Rainer Bodensohn’s flute, and Eddy van Overheidt’s organ and funky wailing. Definitely not toe tapping music and not a good idea to play if you are under a lot of stress or your kids are running around the house yelling. This is high brow energetic music that demands your full attention. Fortunately for us, along with the original Smile a While recorded in 1972, Musea also included three bonus tracks originally recorded for SWF radio in 1971. Overall another excellent reissue from Musea’s vaults.

Neil Rolnick - The Economic Engine – American composer Neil Rolnick has been working in the intersection of music and computers since the 70s, and this recent recording presents fully realized visions of several directions you can go...  (2010) » Read more