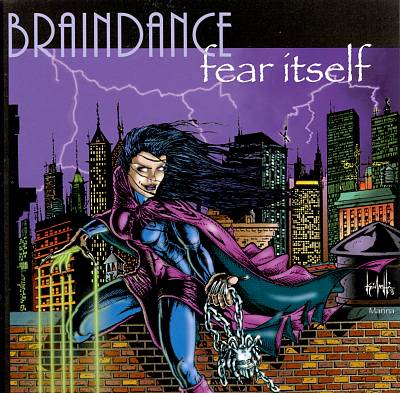 A five-piece from New York, Braindance offer an incisive progressive rock with a metallic edge, science fiction themes and an overall dark and gothic spirit. Using acoustic and electric guitars, bass, drums and keys, the band shifts rapidly between rapid-fire prog metal and a more relaxed acoustically rich sound. Lead vocals are handled by Sebastian Elliott, who delivers most of his power in the lower registers, while the rest of the band offer solid harmonies to balance him out. Vocals are sometimes treated, offering a further alienated feeling — an effect works well, and gives Braindance a unique character that I think most will appreciate. While their music and harmonies may elicit comparisons to Dream Theater and Belgian band Now, the sci-fi aspects recall the band Roots of Consciousness. At first listen this writer was a little put off by all the TV and movie clips between the songs (albeit well integrated with background tracks provided by the band), but after a few listens they integrate well with the overall concept. Most of the material is written by Elliott and guitarist Vora Vor, who underpins the music with an acoustic touch while soaring over it with her blistering guitar leads. In all, Fear Itself is an outstanding effort that I’m sure many will enjoy.

Soft Machine - Third – For those not familiar with Soft Machine, this is probably the best place to start; this marks the major turning point in the band's career, a shift from a more song-oriented style, through a phase of...  (1994) » Read more