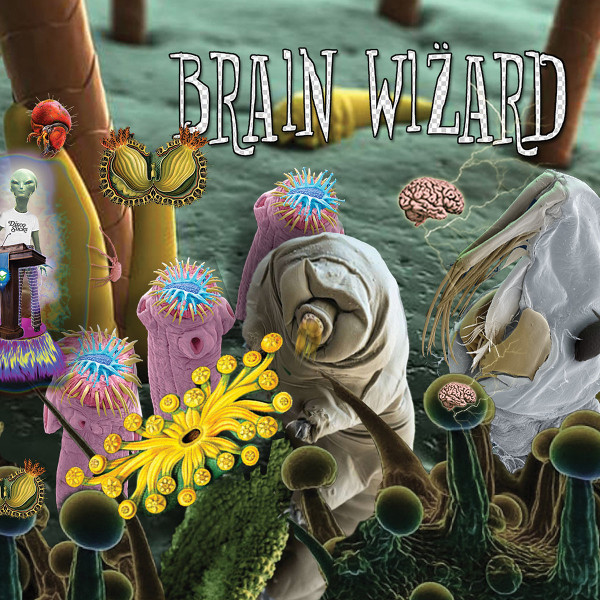 Brain Wizard is basically a one-man band consisting of Kurt Elzner, who is assisted here and there by bassist Zach Lansdowne. Elzner has a long history in music — I remember him from a Seattle band in the 80s called The Purdins, but he’s also worked with Mazzy Star and others. Most Hella Dopest is testimony that solo outings can indeed be worthy, when the one person is talented enough. These 11 tracks are full of clever rock with tinges of psychedelia and just the right amount of weird humor to make for a vastly entertaining listen. The mythology behind the project involves an interstellar being called the Brain Wizard who has an Epic Cosmological Plan beyond the comprehension of mere mortals and who telepathically transmits songs to his disciples on Earth. All good fun, though it would probably come off as pathetic if the songs weren’t in fact really good. Most of them are appealing from the first listen, like the opener, “Life Is Fun,” with inventive electronic noise peppering a head-bobbing groove and a multitude of vocal parts. Or “Lazy Superman,” which tells of a hero who’s tired of always having to get humans out of trouble: “The more you give to them, the more they ask of you, and that’s not what friends do.” “Interdimensional Bigfoot” and “Interstellar Space Love-Thing Woman” exhibit goofy humor built on science fiction B-movies infused into trippy sampled percussion (in the first case) and slinky rock with backwards guitar, overdriven organ, and bleepy synthesizers (in the second). Each track has its own flavor and its own little quirks, and repeated listens reveal additional details. Elzner is obviously having fun, and that feeling is infectious.

Bumble B - Flight of the Bumble B – Bumble B is the female lead singer for The Smell of Incense. When they performed at the Herzberg Open Air festival in 1999, Bumble B entertained the audience with her unaccompanied Norwegian folk...  (2005) » Read more

Gryphon Alive and Kicking in 2015