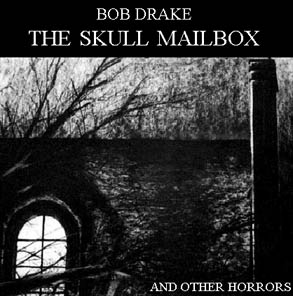 Bob Drake may be a genius, but it is fair to say that, as far as the results of his craft go, he is more than a bit scatterbrained. The Skull Mailbox is chock full of ideas, often more than one for each of these 27 tracks. There are some recurring musical themes to give the work a sense of continuity, and the lyrical themes all center on tales of the bizarre and macabre. But rather than a modern big-budget horror film packed with special effects, spurting blood, and six-channel Dolby digital pummeling, Drake’s tales are more reminiscent of spooky stories told around a campfire – kind of goofy, full of strangeness, and with a little twist at the corner of the mouth. Most of the tracks are built around acoustic guitars, often played with a frenetic fingerpicking style. Onto that foundation, Drake overdubs electric guitars, keyboards, drums, violin, a multitude of voices, and other instruments unlisted. The voices alone provide quite a bit of variety. Drake sings, speaks, and shrieks in a wide variety of tones, both straight and processed, and you’d swear he had help. The whole thing fits together as a more or less seamless single work, albeit one that jumps around stylistically. One of my favorite features is the scratchy electric guitar sounds that show up at unexpected times, providing seemingly random bursts of distortion. While this CD is too jumpy to listen too frequently, it is one of the most original and inventive releases of the year.