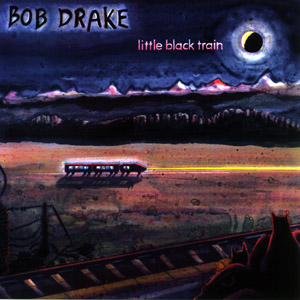 Little Black Train is a cleverly appropriate title for this collection of musical wizardry by guitarist / violinist / bassist Bob Drake. Known to most for his work with Thinking Plague and 5uu's, Drake is an exceptional musician who has obviously absorbed a wealth of musical idioms and ideas over the past few years. This album seems to represent a furious emancipation of the sounds accumulated in Drake's head, let loose in a skillful and sometimes irreverent torrent that plows through myriad juxtapositions like a runaway locomotive. The press release for this disc likens the music to a hypothetical scene of Beefheart's Magic Band conjuring up its own twisted soundtrack to Deliverance. While that image is certainly apt for parts of this, it neglects some important aspects of this album's appeal. Drake's playing encompasses a pastiche of styles incorporated into a fairly unique voice, which, like that of Bill Frisell, is often tinged with country and bluegrass affectations. However, as with Frisell, Drake knows how to deftly utilize the folky flourishes in the context of the other stylistic elements of his sound, in a way that only emphasizes his originality. The 15 mostly instrumental pieces on Little Black Train churn through a variety of settings where abrupt contrasts are the rule, and Drake's impressive guitar and violin skills are on full display, though not at all in an overbearing manner. Drake's writing talents are every bit as strong as his performance skills, and again like Frisell, he shows an uncanny ability to manipulate texture and harmony in unexpected and sometimes stunning ways. In all, this is a quintessentially progressive album, and one of my favorite releases so far this year.