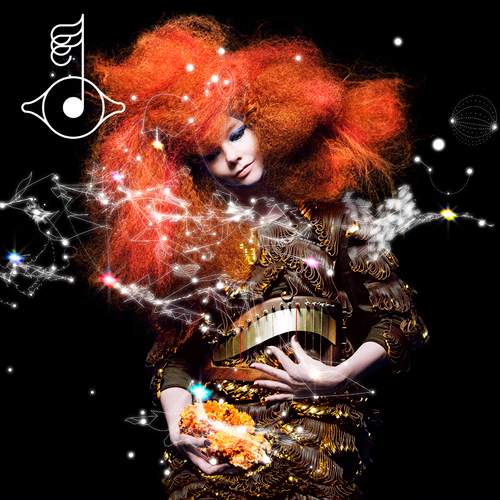 Sometimes it feels strange to be reviewing an artist like Björk, who is well known enough worldwide to attract attention from the mainstream press and even paparazzi (swan dress, anyone?). After all, Exposé is all about "the music the mainstream refuses to notice." Well, in the case of Björk, we make an exception, because she is so freaking weird. I am continually amazed that an artist who has so steadfastly made non-commercial music for twenty years can still generate as much attention as she does. (Kate Bush is in a similar situation, though her music isn't as strange as Björk's.) Biophilia continues Björk's artistic journey away from conventional pop music, though it's not her most experimental release ever. Still, she pushes the boundaries of technology, exploring new ways of composing and recording. All of which would be pointless if the result was drivel. In my view, she's yet to sink to that level (not even close), and Biophilia is no exception. First off, her voice is just so engaging that it will tend to draw you in no matter what the setting. Starting things off on a relatively quiet note is "Moon," which consists of Björk's overdubbed vocals backed by nothing more than a harp. Things pick up a bit for "Thunderbolt," adding what sounds like a church organ, a synthesizer, and (a couple minutes in) some electronic percussion sounds. Much has been made of the biological and astronomical themes behind the songs, but that's pretty unobtrusive unless you're inclined to read the lyrics. Towards the very end of the third track, we finally hear a frenetic electronic rhythm part, briefly reminding us of the energy lying under the surface. Pipe organs butt heads with odd digital sounds of undetermined origin and tinkly bell tones. Tempos ebb and flow, rarely settling into a steady beat for more than a chorus at a time. When, on track 9, a heavily distorted electronic percussion part makes its entrance, we are jarred into another reality for a moment, then the quiet organ tones are back for the next verse. It's all more than a bit insane, but works splendidly to carry us into the singer's idiosyncratic universe.