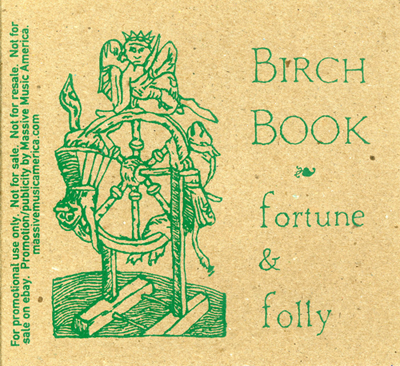 Birch Book is in reality singer/songwriter/guitarist Michael B'eirth (also known as B'ee), a rising star in the acid-folk and psych-folk scene. Fortune & Folly breaks down into two halves, the first addressing the fickle nature of fate and the second investigating life's journeys, both topics forever confronting the wandering minstrel, which B'ee sees himself as in a modern context. There's a sense of authenticity to his songwriting and delivery that evokes giants of the elder days including Nick Drake, Leonard Cohen, Steeleye Span and Fairport Convention. The cover art and B'ee's presentation as the wandering troubadour take the listener further back to medieval times, which are subtly invoked in songs such as "Zephyr through Willows" and "The Carnival Is Empty." The instrumental "Diaspora" and the opener "Birch Sap" even dip into psychedelic realms via ghostly guitar drones and ethereal, wordless chants, which work their way on a smaller scale into other songs like "The Trip Goes On." Otherwise we're in pure acoustic folk territory and it's easy to picture B'ee huddled over an acoustic guitar, perched on a stool and leaning his face toward a microphone in a small bookstore somewhere in rural Vermont, spinning out his songs to a gathering of tea sipping folkies. With songs this "wooden" it's not surprising when his voice slips into a warm country twang, though otherwise his soft and gentle singing rarely rises above hushed recitation. This is an impressive and enjoyable cycle of songs, as long as one can stomach the occasional psych flavoring.