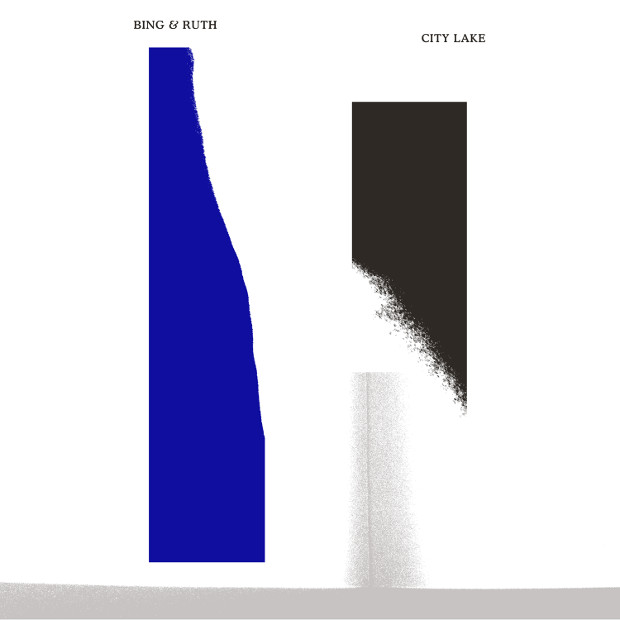 I first encountered this ensemble with their 2014 release Tomorrow Was the Golden Age, and now RVNG has re-released their previous effort, City Lake, originally from 2010. The album’s first release was a limited quantity double LP on the Happy Talk label, and for this edition, three tracks have been added. The music is similar in style to Tomorrow, with composer David Moore’s piano accompanied by a group consisting of two clarinets, two cellos, two wordless vocalists, lap steel, bass, and tape delay effects. There is also some minimal percussion, shakers, hand-clapping and so on, though it’s unclear who is responsible. The overall effect is somewhat like Godspeed You Black Emperor translated a little further from rock influences. It is not in the nature of Moore’s music for the individual instruments to distinguish themselves, and there are times when the sounds could be coming from almost anything, though the timbres of the clarinets and cellos are often noticeable. The lap steel is particularly anonymous, and the female voices can blend in so much that they could almost be another pair of clarinets. The piano is often heard playing arpeggios or chords broken up into simple rhythmic patterns, all backed by a variety of acoustic instruments, usually playing long tones fading in and out to form ever-shifting tonalities. More than once I was struck by the thought that if this music had been performed on synthesizers it would not be that different from a hybrid of ambient and sequenced like you might find on Spotted Peccary. The highlight of the set is the title track, a 15-minute masterpiece of slow evolution, building up from a beginning that’s nearly inaudible to a massive wall of Ligeti-like shifting clusters with wailing electronic noise. I’ve yet to come across the vocabulary to talk about music like this, which seems to grow as much out of the work of 20th Century composers like Stockhausen and Glass as it does from experimental music outside that world, like GYBE and Rachel’s.