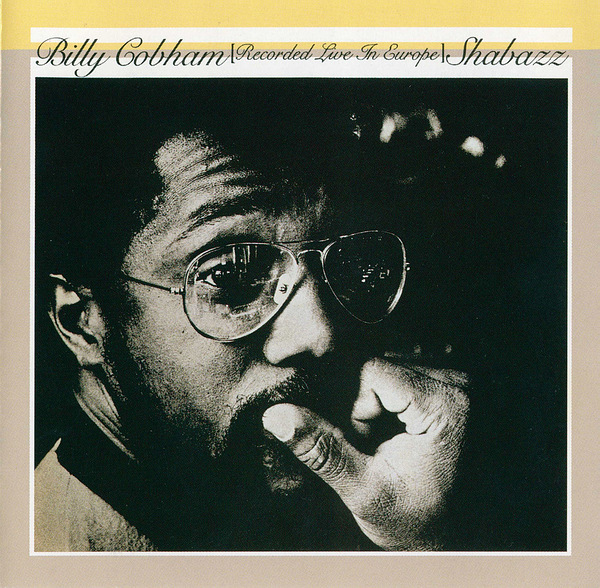 In 1974, drummer Billy Cobham took advantage of a break in activity for Mahavishnu Orchestra by putting together a band to play Montreux and other shows in Europe. His band included the musicians who had worked on his most recent studio album, Total Eclipse, three of whom he’d worked with in his pre-Mahavishnu band Dreams: John Abercrombie on guitar and the Brecker brothers Michael and Randy on sax and trumpet respectively. The crucial role of bassist went to Alex Blake, better known on upright, but a killer here on electric; Bulgarian Milcho Leviev, a long-time member of Don Ellis’ band, handled keyboards; and on trombone he had Glenn Ferris, another Don Ellis sideman. This band is in absolute top form for the four tracks on Shabazz, three of which were recorded at the Rainbow Theatre in London, and the other at the 1974 Montreux Music Festival. The title track kicks things off with a brief drum solo followed by more than ten minutes of intense ensemble work ranging from subtle latin-inflected grooves to high-energy funk. Abercrombie goes crazy with fills in between the ensemble parts, Randy Brecker’s trumpet is treated with wah-wah and other effects, and Leviev turns in some outstanding work on the keyboards, from funky clavinet to cool electric piano to a superb synthesizer solo that combines flashy licks with imaginative knob-twiddling. And behind it all, Cobham and Blake show themselves to be one of the great jazz-rock rhythm sections, balancing freedom with tight grooving. Cobham’s playing is the combination of technical busy-ness and perfect feeling that he’s known for. The next two tracks are revised versions of “Taurian Matador” and “Red Baron,” both of which appeared on Spectrum. The first features Michael Becker on sax backed by a funky beat that’s about as fast as funk can get and still be funky. The second gives Abercrombie a solo spot, where he mutates the blues into something amazing and distinctively his own. Jazz-rock in the 70s is generally thought of as a small group phenomenon, but Cobham’s masterful arrangements make it work with a larger ensemble, with creative harmonies and precise playing. Looking back from a few decades on, it’s no surprise that Cobham, Abercrombie, and the Breckers shine, but the real revelation here is how good Leviev and Blake are. Leviev has numerous credits as a leader and as a sideman with many other artists, but this set proves he deserves to be counted with Jan Hammer, Chick Corea, and the rest of the greats of the heyday of fusion. Blake is a great example of a jazz bassist who brought a distinctive voice to the electric, with a gritty, growly tone and a perfect feeling for the funky energy Cobham needed. Shabazz is a great sounding recording for both performance and audio quality, and deserves a place as one of the best live fusion albums of the 70s.