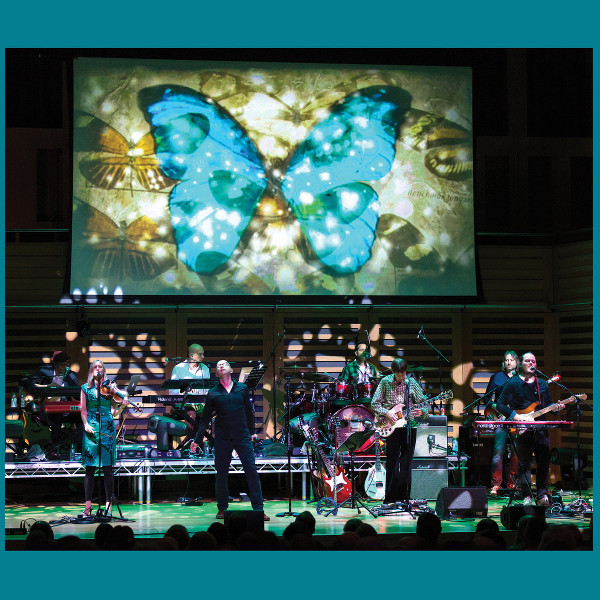 The Kings Place gigs were the first live performances by Big Big Train in 17 years and of course they were a completely different group back then (you don't even have to backtrack that far to realize this). I've watched a couple videos from these gigs and there are a few on their live Blu Ray, Stone and Steel, as well, and they all cemented me that it's quite possible for a large group of musicians who have only worked in studios together to actually transcend this work on stage. Big Big Train are essentially an octet here but, somewhat invisible in the pictures of the shows, there's also a brass section on the balcony to the upper left. It isn't uncommon for bands to augment themselves with these sorts of sections or even string sections or orchestras, but it is fairly uncommon for hired help to come on board and play this passionately, to truly feel like they're part of the larger group.

There's a feeling here that the band knows their best material. Disc one includes the two big epics from their best album, The Underfall Yard. The second disc the best from their English Electric series. All of these, with some slight exceptions, are written by Greg Spawton, who has to be one of the premiere writers of Genesis-inspired symphonic progressive music today. No matter how lengthy the material is, the pieces tend to be locked down by really excellent melodic themes (usually reprised in the right places) while leaving those to explore various moods and developments, also leaving plenty of room for all the instrumentalists to solo. But no matter how great a lot of these pieces are, when the band develops to a crescendo and that horn section comes in, the music embodies how powerful this style can be. They are absolutely devastating in those moments, in particular in the epic length "East Coast Racer," towards the very end of this collection.

I'll admit the David Longdon penned shorts aren't quite as much to my taste. I skip "Make Some Noise" completely and it's possible "Wassail" will eventually follow that tendency, but these songs are so short they really don't make much of a dent in my enjoyment — they're still as well played as the rest of the music. In many ways these pieces (along with "Uncle Jack" and "Judas Unrepentant") give one a bit of a breather anyway. None of them prevent this from being one of the best live albums of the decade.