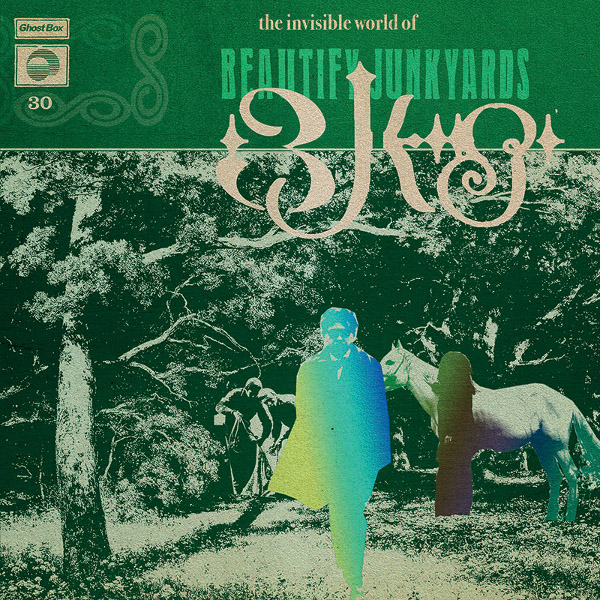 For their third album, Lisbon’s Beautify Junyards takes you into their secret garden of delicate acid folk songs, The Invisible World of Beautify Junkyards. Led by João Branco Kyron (vocals and keyboards), band members Rita Vian (vocals and synth), João Moreira (acoustic guitar and synth), Sergue Ra (bass), Antonio Watts (drums), and Helena Espvall (cello and acoustic guitar), formerly of Espers, have produced fifteen original songs and instrumentals. As on their previous releases, the band records outside and the background sounds of birds and other ambient sounds peek through the music adding to the sense that you are part of their invisible world. Some songs are sung in English, while others are in Portuguese. The mixture of shimmering electronics, Mellotron, dreamy vocals. and acoustic guitars provides glimpses of their take on British acid folk, Tropicalia, and experimental music. When I saw the track title “Golden Apples of the Sun,” I expected to hear a cover of the Judy Collins’ song based on W. B.Yeat’s poem “The Song of Wandering Aengus,” but instead Beautify Junkyards provides a moody electronic instrumental accompanied by cello that reminds me tangentially of Richard Pinhas’ “West Side.” Once you have wandered through their forested world of dappled sunlight and perpetual spring, the disc closes with a strange little track called “Trackways.” This eerie track of electronics and Rita reading about UFOs, sacred sites, and ancient aliens is like something straight of the mind of Erich von Däniken. This new album is quite good and will be sure to please their fan base.