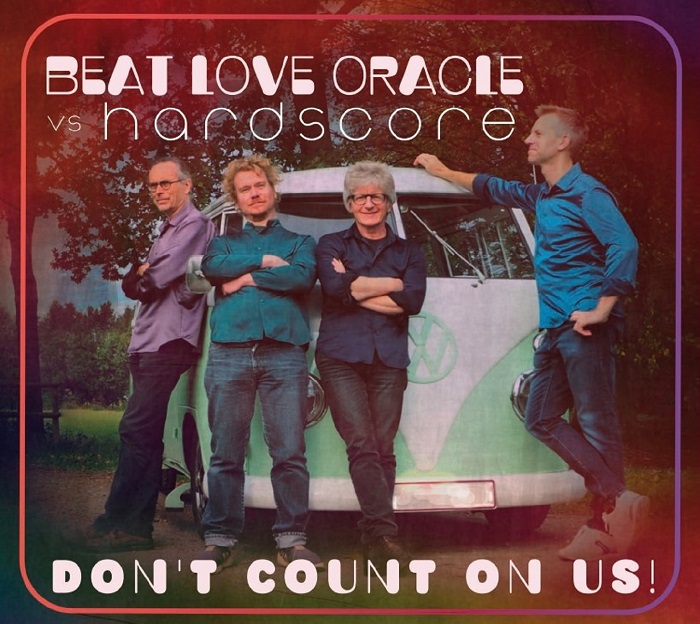 An interesting CD release here, two sets of music by two different Belgian groups released sixteen years apart, the common factor being composer, keyboardist and mallet percussionist Frank Nuyts, as well as sax player Frank Debruyne, who were both members of the earlier octet Hardscore, as well as the current four-piece ensemble Beat Love Oracle, who released their first LP titled Who’s Counting? last year in 2020. On the other hand, Hardscore hasn’t been heard from since 2004, when they released their last album Monkey Trial. At that time the octet was live-premiering new material from a project titled Carbon Fixation, of which only three numbers had been properly recorded in studio versions, yet those to date have never appeared on any releases. So the order that material is presented on this CD release begins with the four tracks from the Beat Love Oracle album from 2020 with one bonus track added (it was originally released LP only) then moves back sixteen years to those final three unreleased recordings by Hardscore, after which we get a newly recorded version of the track “13 Seconds of Bonobo Sex” which was originally featured on Monkey Trial way back in 2004.It’s worth noting that none of the members of Hardscore that appeared on that 2004 album, save Nuyts and Debruyne appear on the four Hardscore cuts here, intimating that there was a wholesale change in personnel in the band’s final days. Let’s start with the Beat Love Oracle material, which opens with the fourteen minute “What Beats Watts?,” an expansive piece of what could best be considered chamber jazz-rock, with saxes and marimba out front, and a solid roadbed of drums, percussion and bass powering it all from below; when the sax is soloing’ Nuyts might switch to synths to give the piece a sort-of symphonic backdrop at that time. And did I mention the very strange vocals that don’t cut in until around the eleven minute mark? “Please Don’t Come (Any Closer)” is a happy-go-lucky instrumental piece that might recall Zappa in his Uncle Meat period. “Shift! We’re Lost” has a general improvisational feeling that wanders back to complex composed territory from time to time. One might hear traces of Canterbury in the Beat Love Oracle sound as well. As we shift to the final four tracks of Hardscore material, the sound becomes even more jazzy and orchestral, highlighted by the powerful female vocals of Annelies Van Hijfte, perhaps reminiscent of a breezy and less angular version of Thinking Plague. Beginning to end, this is an outstanding release showcasing the compositional brilliance of Frank Nuyts.

Satoru Wono - Sonata for Sine Wave and White Noise – Click. Shhhhhsshh. Bleep. The first minute of “Overture” sounds something like a couple of malfunctioning cell phones making random sounds. Then the beeps and hiss begin to take shape and find...  (2004) » Read more