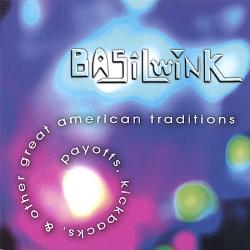 While the opening cut displays some fairly standard rock/funk riffery, the grotesquely distorted vocals and unusual effects make the two minute affair somewhat unique. Basilwink is the Wisconsin-based duo of Jim Bloedel and Jeff Marcus, who are responsible for all instruments and vocals here; this is their third release (although Marcus has a few solo releases as well). Moving forward we pass through a handful of cuts that follow a similarly interesting trajectory, creating short innovative slabs of eccentric rock, often with muted or treated vocals, while at the same time taking irreverent stabs at them with effects and other musical mischief, making for a fairly quirky listen. But that’s just the beginning. When we hit track 7 (“Bombs in the Neighborhood...”) everything changes; this expanded minimalist electronic exploration moves into new territory for the duo, with droning voices and otherworldly effects. “Angry Sun” is another unusual workout for strangely effected sounds and loops, like voices of bizarre tiny insect creatures, all underpinned by a middle-eastern sounding melody in a blissful rock groove. Carrying onward, we move through a few short mostly instrumental electronic rock vignettes, as well as a longer cut featuring spoken voice lyrics (both straight and heavily distorted) with a muted rock guitar underpinning. In all, this disc is packed with unusual twists and adventurous turns, and a big step forward from their previous disc.